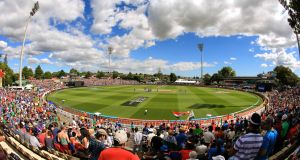 Ireland’s long wait to reach the top table of international cricket recognition was rubber stamped on the back of a unanimous vote at the International Cricket Council’s annual conference at The Oval in London on Thursday afternoon.

The vote also admitted Afghanistan as a full member, with both sides now eligible to play Test match cricket for the first time, bringing the number of countries playing Tests to 12. The process leading to the decision saw a membership committee recommendation based on detailed applications from both Ireland and Afghanistan put to the ICC Full Council meeting.

A statement from the ICC confirmed that “both have clearly demonstrated they meet the new criteria and as such have made the progression to Full Membership”.

Ireland and Afghanistan will now stand to receive a bigger wedge of the $215 million set aside for those sides outside the present Test-playing nations.

Cricket Ireland chief executive Warren Deutrom said: “We are delighted and proud with today’s historic announcement. It is an extraordinary testament to the talent and endeavour of thousands of passionate players, coaches, volunteers, staff, clubs and committee people.

“We would like to thank most sincerely the ICC and its members for bestowing this honour on us today. It is a reflection not just of our past achievements but of our potential to grow our great game. We shall spend the next 24 hours marking the moment and celebrating this great day for Irish cricket and next week the hard work of planning to transition to full membership and Test status begins in earnest.”

ICC chief executive David Richardson said: “I’d like to congratulate Afghanistan and Ireland on their Full Membership status which is the result of their dedication to improving performance both off and on the field resulting in the significant development and growth of cricket in their respective countries. Both have clearly demonstrated they meet the new criteria and as such have made the progression to Full Membership.”

Ireland’s acceptance brings to an end a decade-long search for recognition as a full member and to finally shed the associate status that they had risen above during World Cup appearances in 2007, 2011 and 2015.

Hopes of a move up to full member status following the 2011 World Cup were hindered by the volatile nature of the sporting geopolitics that exists in world cricket. Indeed, all had seemed lost after the infamous ‘big three’ deal which saw India, England and Australia carve up the majority of revenues to the detriment of the development of the game.

At times Ireland was also held back by those sides just above them in the one-day rankings, in moves that smacked of protecting their slice of the ICC pie.

Ireland’s increased income will not come in a bag of cash, with revenue streams continuing to be based on a strict set of criteria based on the growth of the game across all levels, as well as development of good governance models and cricketing infrastructure.