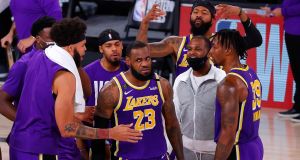 LeBron James had 38 points, 16 rebounds and 10 assists, leading the Los Angeles Lakers to their first NBA finals in a decade with a 117-107 victory over the Denver Nuggets in Game 5 of the Western Conference finals on Saturday near Orlando.

Anthony Davis scored 27 points for the Lakers, who advanced to their first NBA finals since 2010, when they beat the Boston Celtics in seven games. They will face either the Celtics or Miami Heat.

“It means a lot,” Davis said after the game. “It’s a step closer to our goal. Obviously, you have to win the (conference) finals in order to go to the (NBA) finals. Being with this team from day one, the journey and adversity we’ve been through has been nothing but amazing. ... But we’ve got four more left.”

“So proud. What more could you ask from a group?” Nuggets coach Michael Malone said. “What more commitment, sacrifice, just everything in the last 82 days that our team has gone through. The history that we’ve made. The adversity that we faced and never ran from it, embraced it, owned it at times. From a pride perspective, I couldn’t be more proud.”

A three-point play by Jokic cut the Lakers’ lead to 103-99 with 4:35 remaining. However, James scored nine consecutive points to seal the deal for Los Angeles.

“My teammates said bring us home and it was my responsibility to try to make the right plays and do the right things on the floor to help us win ballgames,” James said during the postgame trophy presentation.

The third-seeded Nuggets rallied from 3-1 deficits in back-to-back series against the Utah Jazz and Los Angeles Clippers but the task was too much against the Lakers, the top seed in the West.

“I really felt like we had a chance to win.” Murray said afterward.

In the third, the Lakers increased their 10-point halftime edge to as much as 16. After Dwight Howard was issued a flagrant foul after a collision with Millsap with 4:29 remaining in the quarter, the Nuggets cut the gap to 80-73 after a 3-pointer by Michael Porter Jr 16 seconds later.

A 9-2 Nuggets surge pulled them within 82-80 with about a minute left in the quarter. Two free throws by Murray knotted the score at 84 before Davis’ 3-pointer put the Lakers up 87-84 heading into the fourth quarter.

Grant scored 14 points in the third.

Jokic picked up his third foul at 9:32 of the second quarter with the Nuggets trailing 35-34. James sparked a 14-4 run with eight points, all of them on buckets inside, for a 49-38 Lakers advantage midway through the quarter.

Denver sliced the margin to seven before Los Angeles took a 61-51 lead at the break.