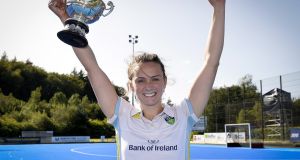 Despite just one collective training session for UCD and the question of whether they would be to play being up in the air until late on Friday night, captain Ellen Curran proclaimed her side’s women’s Irish Senior Cup 3-1 final victory over Pegasus as one like no other.

It was their third success in the past four years as they produced a majestic first-half display to set the tempo. Hannah McLoughlin – a strong contender for player of the match – nailed a fourth-minute penalty corner before Michelle Carey’s camogie-inspired sleight of hand secured the second on the quarter hour.

Up to half time, goalkeeper Clodagh Cassin was scarcely tested but she was far busier in the second period as Pegs found their mojo. Ruth Maguire was pivotal and deservedly got one back in the third quarter from a smart penalty corner.

Katherine Egan killed off their comeback hopes, however, with a sumptuous finish to an excellent break-out.

As a layover from the 2019-2020 season, UCD were allowed to field club graduates Suzie Kelly and the Patton sisters, Orla and Sarah, for the final despite their decisions to move on next season.

It meant they only rejoined the camp on Thursday for one last hurrah. A day later, they were left wondering if they could travel to Hillsborough at all with news the college campus was escalating to Level 4, bypassing Level 3 restrictions, with written confirmation only coming through at 9pm that all was in order.

“It has been so long since we played that semi-final against Loreto last October,” Curran said of the bizarre campaign. “We are so grateful to be here today in the circumstances and, even on Friday, we wondered if it would go ahead or if our supporters couldn’t travel.”

“Getting the girls back in on Thursday night was really emotional and they were all phenomenal.”

Later on Saturday, UCD were denied a unique double when their men came within 12 minutes of a monumental shock but eventually succumbed to Lisnagarvey.

The students built a deserved 2-1 half-time lead via Andrew Meates and Sam Byrne and Garvey looked to be going up blind alleys until Andy Edgar was sent to the sin bin.

Despite the shortened numbers, the Ulster side summoned up quick-fire goals from Ben Nelson and Andy Williamson to turn things around and win 3-2.

It denied UCD a first men’s crown and ended Lisnagarvey’s 15-year wait for the trophy when coach Erroll Lutton was skipper back in 2005.