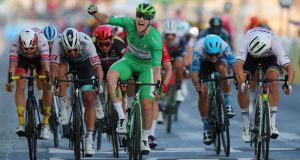 Sam Bennett in the green jersey celebrates as he crosses the finish line at the last stage of the Tour de France in Paris on Sunday. He is the first Irish rider to win the final stage. Photograph: Thibault Camus/AFP via Getty Images

There are few more famous images in cycling than the final stage of the Tour de France racing down the magnificent Champs-Élysées, and for Sam Bennett the winning of it on Sunday completed a new chapter in Irish sporting history.

The 29-year-old from Carrick-on-Suir became the first Irish rider to win in Paris, and only the fifth rider in history to win there in the green jersey, which rewards the Tour’s most consistent finisher based on points gained in each stage.

He also became only the second Irish rider to win the green jersey in the biggest bicycle race in the world after Seán Kelly last won it in 1989, the year before Bennett was born.

“It’s a dream I never really knew I had, because I never thought I’d be good enough to do it, never thought I’d be strong enough to do it,” said Bennett, after winning the final stage with his right arm already aloft, a bike length ahead of reigning world champion Mads Pederson from Denmark, with his closest rival for the green jersey Peter Sagan from Slovakia in third.

“So super proud, a very special moment in my career. All the years trying to come up, trying to make it, it took me so long to get here,” he said.

“With so much support from home too, that pressure and expectation was something I never felt before.”

After following in his footsteps while at the same time stepping out of them, Bennett paid tribute to Kelly, one of the first and lasting influences on his own cycling career, who won the green jersey four times during almos t a decade as one of the world’s best cyclists.

“I’ll never be the next Seán Kelly, plain and simple, I’m not that good. I’m still proud to do part of what he’s achieved,” said Bennett.

“He was sending some video messages, during the race, and it was nice to have that, but I can’t tell you how excited I am to win the green jersey, win on the Champs-Élysées, the world championships of sprinting.”

Connacht coping with Covid case and injuries ahead of trip to Edinburgh 07:00
Dundalk quietly confident ahead of Europa League opener 06:00
Molde unlikely to see themselves as also-rans as they face Dundalk 06:00
Measured approach sees Ireland women’s rugby squad taking shape 06:00
Philip Reid: Hard to find the sense in closing golf clubs 06:00
Here is your handy guide to sport on television this week