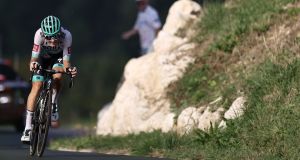 Germany’s Lennard Kämna (Team Bora-Hansgrohe) in action on his way to winning the 16th stage of the Tour de France between La Tour du Pin and Villard-de-Lans. Photograph: Kenzo Tribouillard/AFP via Getty Images

One down, two to go. With his legs feeling super bouncy on the team bus to the start, only a little less so at the finish, Sam Bennett comfortably survived the first of three Alpine stages still a safe distance clear in the green jersey.

Indeed Bennett finished with nothing lost or gained to his Slovak rival Peter Sagan, beyond conceding the kudos of a first stage victory to Sagan’s Bora-Hansgrohe team in this year’s Tour de France, after the young German Lennard Kämna broke off the front of long-distance breakaway to claim the biggest win of his career – by some distance.

There was no worry about time limits either, Bennett finishing impressively fresh-looking in the second main group, 27 minutes and 27 seconds down, alongside fellow Irish rider Dan Martin and the likes of defending champion Egan Bernal from Colombia. With the proper rooftop finish to come on Wednesday, this was perhaps the simpler survival day than the less straightforward one to come.

A day after saying last Tuesday’s crash was starting to take some of the shine off his race, Nicolas Roche also managed to produce his best finish of this year’s Tour when finishing eighth on the stage, his second top-10, two minutes and 47 seconds behind Kämna. Roche now sits 65th overall.

There was no great movement either at the front of the race, the yellow jersey group also happy to take a more cautious approach to stage 16, 164km of constantly rolling terrain from La Tour du Pin to the high plateau finish at Villard-de-Lans. Primoz Roglic from Team Jumbo Visma finished in the first main group nearly 17 minutes back, and retains the 40-second lead over his Slovenian understudy Tadej Pogacar from UAE Emirates, who also finished 16:48 down.

“Yeah, it was okay,” said Bennett, perhaps a little surprised himself at how comfortable the day had gone, most of his Deceuninck-Quick Step team-mates for company too. “I expected a tough start, but in the end everything was okay. I think I was just having a good day, and it was a nice day to have a good day, and I just hope I haven’t over-used the legs for the next few days.

“Once the intermediate sprint is done, it’s about conserving for the next day. If you go too much over your limit one day, you’re gone the next day, especially in this year’s Tour, which is so hard. So at the moment everything is going to plan, but we’ve still a lot of work to go.”

Neither Bennett nor Sagan were in the first breakaway group that contested the intermediate at Saint-Joseph-de-Rivière, after 44.5km, where the Italian Matteo Trentin picked up 20 points, plus another three at the finish, 14th best in the stage. That brings his tally of 212 a lot closer to Sagan’s 224, with Bennett still 45 points clear with his 269 points.

There was good reason for caution on the day too given the hell that awaits the entire peloton on stage 17: the 168km from Grenoble to the ski resort at Méribel, on the Col de la Loze, is by some distance the highest finish of the 2020 Tour, 2.3km high to be exact, coming after 21.5km of climbing, with uphill gradients of 20 per cent.

That combination of high altitude and steep gradient will certainly test the legs unlike any stage so far, this the fifth highest mountain top finish in Tour history, behind the Galibier, the Granon, Val Thorens, and the Izoard.

Assuming he gets through the next two Alpine stages, Bennett also admitted that Friday’s rolling stage 19 finish at Champagnole may well throw up some significant green points, and the Champs Élysées certainly will.

“Yeah, Friday will be a battle I think, a hard day. But I think the way it’s going, it will be a fight all the way to Sunday. It would be nice to be able to enjoy Sunday, have it in the bag, but I don’t think it will be that way. I am getting more optimistic, maybe because I felt so good on the bike today, but that’s only one day, I can’t get ahead of myself. Things can change.”

Kämna’s last solo break 10km from the finish was certainly impressive, given his only previous professional win of any sort was at the Critérium du Dauphiné last month, and he dropped last year’s Giro d’Italia winner Richard Carapaz from Ineos Grenadiers in the process, the Ecuadorian finishing 1:27 down. It means the team formerly known as Sky still haven’t won a Tour stage since Geraint Thomas at L’Alpe d’Huez in 2018.

There was some movement in the mountain classification, as B&B Hotels-Vital Concept climber Pierre Rolland moves into second place, level on points with Benoît Cosnefroy (AG2R La Mondiale).

“I’ve had such bad experiences in the Tour before, where I’ve suffered a lot more, and if I could get through it back then, I can get through it now. The challenge now is getting over them after chasing the intermediate sprints as well.We’re still very far, but we’re getting closer. It’s also a different way of racing, with the green jersey, I have to be constantly racing, and that’s a wearing down process.”

St Loman’s secure Westmeath title after extra time 18:50
St Thomas’ edge into Galway final keeping three in a row dream alive 18:44
Sixmilebridge too good for neighbours in Clare hurling final 18:48
Celtic keep up the pace with comfortable win over Hibs 17:40
Dicksboro pour out all their subs but can’t stop Ballyhale tsunami 17:35
Here is your handy guide to sport on television this week