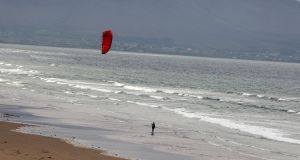 Kite surfing on Inch Beach, Co Kerry. There is no more productive exercise than a long run down a sandy beach – as Kerry footballers past and present can attest. Photograph: Lorraine O’Sullivan/Inpho

The plan was to head straight from the Kerry press night to Inch Beach for a five-mile run and then three rounds of Wim Hof breathing. There is always something irresistible about a trip down to the Kingdom in late summer and especially in anticipation of another Kerry-Dublin All-Ireland final.

The press night ran a little late, Kerry manager Peter Keane slowly queried on what it will take to beat this unbeatable Dublin football team, which he admitted were a “team for the ages”, and of course they are.

Defender Paul Murphy was also asked about Dublin’s perceived advantage given their vast population and resources which he more or less shrugged off, as if to ask how many All-Irelands have Kerry won?

Things dragged on a little, only we did also get a good feel for Kerry’s GAA Centre of Excellence at Currans, within earshot of Kerry Airport in Farranfore, a properly impressive training ground complete with four full-sized floodlight pitches, two more in waiting, plus a weights and physio room and all to rival anything seen anywhere around Dublin.

From there it was a quick dart across to Inch, only to discover that wild clouds and rain were fast sweeping in off the Atlantic, from both the Dingle Peninsula side to the right and the Iveragh Peninsula to the left, and the hour was getting late.

Sammy’s Bar stops serving at 9pm these days for some reason so rather than waste the drive it seemed like a good idea to go Airbnb in the Jeep Wrangler and run first thing in the morning instead.

I’ve said it before, but there is no more productive exercise than a long run down a sandy beach and, with the possible exception of Donegal, there is no better training ground in the country for it than Kerry. It’s the most natural running surface, and draws you into the most natural running style. There is also the special bonus of a cold dip in the sea water at the end, which brings about such an immediate feeling of recovery that straight away you want to start all over again.

Athletes have known this for years. It’s one of the reasons it’s the opening scene of Chariots of Fire, Eric Liddell and the lads running barefoot along the beach at St Andrews, in slow motion, naturally, with that classic theme tune by Vangelis airing in the background. That tune won Vangelis an Academy Award in 1981, and was playing in my head from the first stride down Inch just as the early morning clouds drifted miraculously apart.

No beach runs as stunning as Inch, you think, until you reach the end and see the tip of Rossbeigh directly across the water and remember Kerry has an unfair advantage here.

The view also extends far up towards Kells Bay and the direction of Cahersiveen, where Maurice Fitzgerald can still be found running and dipping in nearby White Strand, just like he did as 1997 football of the year, in what is effectively the far side of Valentia Harbour.

Somewhere up that Glenbeigh direction too is where Mick Murphy lived and trained on his bike, the original Iron Man of Irish sport, long before that took on another connotation, famous for winning the Rás Tailteann in 1958 where his methods included cutting the vein of cow and drinking its blood during race, back when hardiness was the ultimate virtue.

On my run back the morning light shone out by Dingle and towards Slea Head, where reports of Páidí Ó Sé training like an animal up and down Ventry, always with a football in his hand, still emanate these days, and inevitably the practice was inherited by his nephews Darragh, Tomás, and Marc. There are softer, more sheltered beaches around Ballyferriter and the positively heavenly Wine Strand, though no less stunning a training ground.

It hit the perfect spot, and after a quick salute to Tom Crean in Annascaul on his three major expeditions during the Heroic Age of Antarctica Exploration it was back towards Tralee, where the view also takes in Castlegregory and the wide stretches of beach at Maherbeg, where even the shortest run can generate the sort of hunger that can only be satisfied by a feed of fish in Spillane’s.

By mid afternoon and still hungry for running it was another quick dart across to Banna Strand, where some of the very best Kerry footballers trained, and will still recount the many tales of gut-busting sessions around the sand dunes, morning and evening.

The steep hill over the main entrance to Banna was a particular favourite, and the record time from bottom to top is still held by Mike Sheehy, and for several generations of Kerry footballers, from John O’Keeffe to Tadhg Kennelly and Tommy Walsh, Banna remains a training ground first and a playground second.

That’s because most of these Kerry footballers were hard men too, and there was a time they may have also sensed perhaps some softness about the Dublin footballer. That’s gone out of Dublin now because of training and management and not more resources.

It’s often assumed too Kerry’s football greatness is somehow inherited, only most of the Kerry greats were either natural athletes to begin with or else a product of their natural training environment. If the secret is something in the water, then it must be in or around the sea water. Who really knows?

My dad was born and raised four miles from Banna and never once ran down that beach or swam in it, and it didn’t stop him from becoming the first Kerry athlete to run in the Olympics in Tokyo in 1964.

Con Houlihan also said the idea of a natural born footballer or hurler is a myth, but sometimes myths are more powerful that the truth. Which may or may not help explain why Kilkenny and Tipperary keep on winning hurling All-Irelands, while Dublin still can’t get a look in there.

It’s true too that parts of Dublin also have some decent beaches and access to sea water only, a bit like the arguments surrounding their perceived advantage in Gaelic football due to their vast population and resources, they are occasionally full of shit.