Three Irishmen in yellow: the glory and tragedy of the maillot jaune 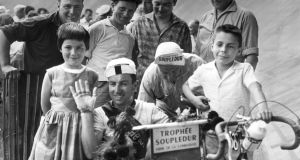 Irish cyclist Seamus ‘Shay’ Elliott (1934 - 1971) takes a ride in a pram after arriving at Toulouse during the Tour de France in July 1961. Photograph: Keystone/Getty Images

Question: which Irish rider has worn the most yellow jerseys in the Tour de France?

If you guessed Shay Elliott and Stephen Roche then give yourself 10 points. Now read on.

The story goes that in 1919, in what was already the 13th edition of the Tour, Henri Desgrange, editor-in-chief of the race sponsor and organiser L’Auto newspaper, decided the overall leader should wear a yellow jersey to distinguish him from the rest of the peloton.

Desgrange always claimed this was to reflect the yellow newsprint of L’Auto, others suggesting yellow was only colour left when he went to order the jersey. Either way, that first maillot jaune – as they say locally – was awarded to Frenchman Eugène Christophe and gently mocked in the beginning, spectators pointing out that he looked like a canary.

It didn’t bring Christophe much luck either; he’d a 30-minute lead going into the penultimate stage from Metz to Dunkirk only to snap the forks on his bike and roll into Paris a distant third – a sign perhaps of the glory and tragedy so often woven into the yellow jersey in the years since.

Still there’s nothing the Tour enjoys more than a special anniversary tribute, marking its yellow centenary by starting the 2019 race in Brussels in honour of the Belgian Eddy Merckx, 50 years after he wore the first of his record 96 jerseys, 21 more than Bernard Hinault, and that’s no joke.

It also remains an elite and exclusive club, only 266 different riders in all getting to wear yellow in the 99 years so far – not including those later stripped of it for doping. Along with Elliott and Roche, who each wore yellow three times, Seán Kelly is the only other Irish rider in that club, and that was for one day only.

For Elliott that jersey will forever represent glory and tragedy. My dad tells a story about visiting him sometime around 1970 at his home Kilmacanoge, just off the old N11 in north Wicklow, and there was no sign or even mention of his yellow jersey. It definitely wasn’t hanging in a frame somewhere on his sitting room wall.

Growing up in Crumlin, the son of a motorbike mechanic who only learned to ride a bike at age 14, Elliott achieved the previously unfeasible by breaking down a series of barriers, cultural and physical, to make it into the peloton. In 1955, age 21, he became the first foreigner to be ranked the top amateur in France.

“This Irish lad came to France to learn to cycle,” they said, “but we think he has come to teach us”.

In 1959 Elliott became the first Irish rider to start the Tour, and four years after that, on June 25th 1963, he won Stage 3 from Jambes, in Belgium, to Roubaix, his 33-second victory margin enough to give him his first yellow jersey. Elliott wore the leader’s jersey for the next three days, before losing it in the time trial on stage six.

He then retired in 1967, the first English-speaking rider to wear the leader’s jersey in all three major tours – the Giro (1960), the Vuelta (1962), plus the Tour (1963). Some riders might have lived off those jerseys for the rest of their lives, but Elliott soon returned to Ireland with only the same small suitcase he left with. He split from his French wife, Marguerite, and lost his entire life savings in a dodgy hotel investment in Brittany.

“Just one of those things,” said Elliott, “that happens to somebody that’s nice”.

He’d started up a panel-beating business, but inevitably he missed cycling, and the lure of riding the 1970 World Championships in Leicester proved irresistible. Only having sold his stories of sabotage and of cycling’s drug-taking to the People newspaper, he found himself an outcast from the sport he once charmed.

On the morning of May 7th, 1971 he was found dead in the small apartment above his business on Prince’s Street in the city centre. A gunshot wound to the chest had fatally ruptured his heart and liver, and the coroner’s report deemed it “self-enacted”, close friends still believing it was a tragic accident.

In 1983 Kelly then bridged the 20-year gap between Elliott’s yellow, earning enough bonus points on stage nine of the 1983 Tour, which took the riders from Bordeaux to Pau, to take an overall one-second lead. He wore the jersey for one day – and despite all the success that followed never won it back again either.

Four years after that Roche rode himself into the yellow jersey on stage 19 of the 1987 Tour, into Villard-de-Lans, only to lose it the following day to Pedro Delgado of Spain, on the final climb to Alpe d’Huez. Roche then tracked Delgado until the penultimate time trial in Dijon on Stage 24, where he won back the yellow jersey and wore it again the next day into the finish at Paris. Only like Elliott and Kelly he never won it back in a different Tour either.

With his son Nicolas Roche, and his nephew Dan Martin, the two Irish riders in this year’s race there is now some wonder and hope can that gap be bridged again. Martin is riding his seventh Tour, has won two stages, and has finished in the top 10 in each of the last three editions – ninth in 2016, sixth in 2017, and eighth 2018.

As well as that yellow jersey centenary it’s also being billed as the highest race in Tour history, and arguably one of the hardest, for the first time including three mountain-top finishes above 2,000 metres, including only the third over Stage finish on the Col du Tourmalet on Saturday week, July 20th.

Coming 60 years after Elliott first rode the Tour, this could well be Martin’s time and terrain to chase down his first yellow jersey. There is nothing the Tour enjoys more than a special anniversary tribute. If only for one day.