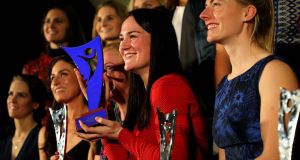 The Irish Times Sportswoman of the Year 2018 – boxer Kellie Harrington.

Astana was a strange place a few months before the Olympic Games in Rio 2016. The huge boxing arena where the women’s World Championships were being staged stood regally alone on the outskirts of the city.

Built on a new road that just seemed to end, Astana’s gaudy buildings were like no other. The city was described as though someone had shaken a Christmas tree and all of the baubles had fallen and stuck in the ground.

The Barys Arena, home of the local ice hockey teams Nomad Astana and HC Astana was the point where the city and the vast flat steppe region of Kazakhstan collided. The scrubland stretched as far as the eye could see like a vast sea lapping up to the fringe of the encroaching city. The interface of a changing world.

It was here Kellie Harrington first felt her own shifting landscape. Unknown outside of boxing the Barys Arena was where the then 26-year-old caught the attention of a broader sporting world.

Although overshadowed by the convulsions of Katie Taylor losing her bout to French fighter Estelle Mossely and earning ‘just’ a bronze medal after five successive world titles, Harrington’s passage to the final at light welterweight was a promising change.

While the Dubliner lost to Chinese third seed Wenlu Wang, her world silver medal was an Irish lifeline to the top flight of world amateur boxing.

Taylor would continue her annus horribilis in Rio and turn professional that year. Harrington would drop four kilos and take over where Taylor left off. In that unforeseen sequence of seismic events in Taylors’ boxing career, Harrington benefited. Taylor as a professional has too.

In boxing you make the weight you chose. Harrington was a good fit for 60 kilos but she was never going to get the Olympic place when Taylor had hunger and edge.

In that simple equation, the now 28-year-old didn’t get the chances she might have if Taylor had not been there. Understandably frustration was an emotion Harrington regularly encountered.

When she won the lightweight gold medal in New Delhi last month on a split decision over Thailand’s Sudaporn Seesondee to become the first ever Irish amateur boxer to win world medals in two different weight classes, Harrington’s “13 years of blood sweat and tears” was not hyperbole from a champion. It was a true description of deep-seated sense of accomplishment.

The St Mary’s BC lightweight was brought up in Dublin’s north inner city with parents Yvonne and Christy and brothers Joel, Aaron and Christopher, who is now a soccer coach in Iceland.

In the days when there was little support and no recognition, her parents had to talk Harrington out of quitting boxing on a number of occasions. They had belief in her when she didn’t have it in herself.

Her street, Portland Row, runs close to the Five Lamps near Dublin’s Connolly Station. In Sean McDermott Street close by there is a poster of Harrington gazing over her community, a disadvantaged area with a history social problems

“Anything is possible when we push ourselves to the limit,” it says.

Her work serving tea and sharing her thoughts every second weekend with the patients at St Vincent’s University Hospital in Fairview is not for money. It’s a contact point with the real world, a step away from a hard but catered for life as a professionally trained boxer.

Where she grew up is also a tight and caring community, where families know each other and where boxing holds a respected position alongside Gaelic games and football. From that rich environment, Harrington has developed a sharp social conscience and independent streak.

When Sports Minister Shane Ross did not attend her homecoming after the gold medal win in New Delhi, she was unconcerned. Boxing is a no-frills sport. People speak their mind. She is no different.

“I’ll be honest with you, it makes no odds to me whether Shane Ross says congratulations or doesn’t because the real people who matter to me have already said congratulations,” said Harrington. “I’m doing what I’m doing for my community and my country – not for Shane Ross.”

She’s a dedicated and careful trainer, an athlete who understands that what she puts in her body becomes her body. She pays close attention to nutrition and diet.

Her discipline to follow tactics and talent to make them work was also evident against Seesondee in the New Delhi final. Boxing from the outside, switch hitting and not being sucked into a punching war served her well. Those things Taylor has always loved to do against solid advice.

Now based in St Mary’s club in Tallaght after stints with Glasnevin BC and St Margarets in South Dublin, Harrington has become, along with the O’Donovan brothers, one of Ireland’s strongest chances of a gold medal in Tokyo assuming the International Olympic Committee work out their toxic dispute over governance and finance with the International Boxing Association.

It has been challenging. Harrington will be the first to admit, that is exactly that what has made her.