Gerard Predergast is the Unsung Sports Star of 2018

Ballymun dad is close to completing 52 triathlons in 52 weeks 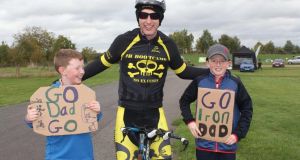 Gerard Prendergast with his two sons.

Once again the list of contenders exceeded expectations. Year on year, without fail. The one annual sporting award which recognises the unrecognised, the meek and the humble, the inspired and the inspiring, who compete not for prize or for purse, only against the strength of their own will, and for reasons far beyond that too.

They are out there on the fringes, the outsiders, the underdogs, unpretentious of their sporting endeavour, with little or no profile or recognition, and definitely no spotlight or attention. And now, as voted by Ireland’s favourite athletics column, the previously Unsung Sports Star award for 2018 goes to Gerard Prendergast.

Most people, naturally, will recognise neither the name nor the sporting feat Prendergast set himself for 2018.

I only heard of him myself a few weeks ago. From Ballymun in north Dublin, he is 38-years-old with a wife and three children. He was into boxing as a youngster, first joining the gym his brother set up in Ballymun in the 1980s, and played some football after that, but otherwise there is no distinct sporting pedigree.

He runs his own small gym in Ballymun now, working as a personal trainer, mostly in the morning and evenings so it doesn’t impede on training or family life.

He’s also blind in his left eye, the result of an accident when he was eight years old, and has restricted vision in his right eye. When I ask him about this he considers himself lucky.

Four years ago, Prendergast couldn’t swim, only like many people of his age, he found himself drawn into the triathlon, a proper endurance sport that allowed him to test his personal limits.

Only one other Irishman had gone there before, Gerry Duffy also winning the UK ‘Deca’ in 2011, all detailed in his book Tick, Tock, Ten. The same Gerry Duffy who once smoked 30 cigarettes a day, with a beer belly to fold his arms on while watching sport on television, and is now a professional motivational speaker.

Prendergast doesn’t harbour such public ambitions, not yet anyway, only not long after completing those 10 Ironman triathlons in 10 days he set himself a new goal for 2018: to complete an Ironman for every one of the 52 weeks of the year – or what he called the 52/52.

That’s not a misprint: that’s a 2.4-mile swim, a 112-mile cycle, and a 26.2-mile run, once a week, for 52 weeks. Only the motivation this time wasn’t personal, but to help raise awareness for mental health, specifically after his wife’s brother Michael took his own life, in May of last year.

He’d been living with the Prendergast family at the time, his own relationship having broken up, and the impact was felt all around.

“That’s the one big motivation,” he tells me.

“After Michael took his own life, the sense of loss was devastating. This was about creating some positivity, for friends from Ballymun, create some energy, some way of helping. I was getting messages from people, inspired to get active, and I was telling them there’s always something to live for, make the most of it.” The central theme of It’s a Wonderful Life, actually.

Prendergast wasn’t going to stress about it either: on a couple of weeks this year (the snow blast from Beast From The East, for example), it was impossible to get out, so he simply made up for it by doing two 10 Ironman triathlons in one week; or for one week this summer, doing five.

Still, it means he has a week to go, to make it 52. So on Friday, three days after Christmas, he’ll swim the 2.4-mile at the NAC in Blanchardstown or Ballymun Leisure Centre (depending which opens first), then head out on the bike towards Balbriggan and a few loops out there to complete the 112-mile cycle, before running the 26.2 miles at Trinity Comprehensive Schools, around a 550m asphalt loop, involving 78 laps in all.

What is his mental approach to this?

“That’s the way I view it, it’s all about mindset. If I think of it as 12, 13 hours of swimming, cycling and running I would never get out of bed. It’s about breaking it down, bit by bit. I’m not racing, it’s not about setting records, or the finisher’s T-shirt. I’m doing to raise awareness of mental health, for myself and for others.”

He’s linked up with Mental Health Ireland, raising close to €5,000 in donations so far, and is already setting himself new goals to stay motivated into 2019 with that fund-raising effort in mind. Next summer, at the Lilliput Adventure Centre, in Westmeath, he will aim to complete 60 Ironman triathlons in 60 days (which will be a world record).

And that partial blindness, he says, is no handicap: “I’m lucky that I live in Ireland, and we drive on the side of the road that we do, because in Europe, I’d struggle, cars would be coming at me. But with the left eye, it just means I can’t see the side of the road on my left, but can see the traffic coming at me from my right eye. That’s a bit of luck.”

What helped swing the vote is his favour is the fact Prendergast is also a devout vegan, beginning for health reasons, and now recognising the ethical and environmental side too.

“It’s not something I’d force on the children, but they are vegetarian, the two youngest into swimming, and are a lot healthier now since.

“And I know mental health is being looked at a lot more, but I still think there is some way to go, because it’s getting more prevalent, more people are struggling.”

Next month, Prendergast will be part of the “Corinthian: Sports and Mental Health” panel, part of the First Fortnight festival, which aims to break down and challenge mental health prejudices through artistic and cultural events.

It takes place at The Sugar Club in Dublin, on Saturday, January 12th. For more information see www.firstfortnight.ie

For his donation page see https://give.everydayhero.com/ie/52-ironman-triathlons-in-52-weeks-2018