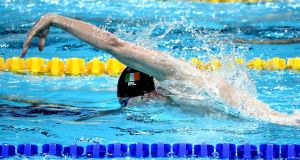 Ireland’s Shane Ryan in action in the heats of the men’s 100m freestyle at the Fina world Swimming Championships at the Hang Zhou Olympic & International Expo Center. Photograph: Andrea Staccioli/Inpho

World 50m backstroke bronze medallist Shane Ryan continued his record-breaking form in the semi-final of the 100m freestyle at the World Short Course Swimming Championships in China on Saturday, but despite swimming a new Irish record, Ryan missed out on the final, finishing in 12th place overall.

The 24-year-old obliterated the previous Irish record of 47.84 in this morning’s heats, touching in 46.97 seconds. He then lowered that once again to 46.93 in the semi-final to make it his fifth individual and a relay record so far this week.

Earlier on Saturday, Ryan was also part of the Ireland men’s 4x50m medley team that set another Irish record. Ryan, with Conor Ferguson, Darragh Greene and Brendan Hyland were impressive, touching in 1:35.05, knocking .58 off the previous record of 1:35.63 set at the 2017 European Championships. The time left the team in 10th place overall and confident going into the 4x100m version of the event on Sunday, where they will look to break a longstanding Irish record of 3:45.66 set in 2001.

Speaking about Sunday’s swim, Ryan said: “I always love relays. It’s so much fun and you never know what could happen. We have a great relay that could really do some damage. If we hit everything right we will be in the top eight and get a second swim.”

Darragh Greene also competed individually in the 50m breaststroke on Saturday morning after a 200m breaststroke Irish record on Thursday, the 23-year-old set another personal best time at the event, touching in 27.43.

As well as Sunday’s relay, Niamh Coyne will swim her final event of the World Championships as she goes in the 200m breaststroke heats.

Jack McMillan continued his record-breaking week in Sheffield at the Swim England Winter Championships on Saturday. McMillan broke the 100m freestyle Irish record in 48.37, knocking Gerry Quinn’s 2016 time of 49.13 from the books. McMillan will look to lower that time in Saturday night’s final.