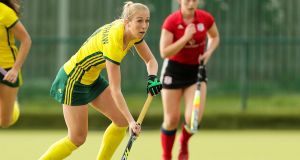 Railway Union’s Sarah Hawkshaw is one of four uncapped players in the Ireland squad for a training trip to Chile in January. Photograph: Laszlo Geczo/Inpho

Twins Bethany and Serena Barr could make their international debuts on the same day in January as they form part of a quartet of new faces in Graham Shaw’s Irish squad for a training camp in Chile.

Ireland will play four games against the hosts in Santiago between January 12th and 16th in the first capped games for the Green Army since winning the World Cup silver medal in the summer.

The duo were both All-Ireland schools winners with Lurgan HS before moving to the US on scholarship with the Liberty University Flames. Their return to Europe has put them back in the shop window with Bethany at UCD and Serena playing for Beeston in England.

Railway Union pair Sarah Hawkshaw and Amy Elliott are the other two who will likely make their debuts on the trip. Hawkshaw followed a similar path to the Barrs, playing four successful years at University of Massachusetts, before coming back to Dublin.

Elliott, meanwhile, is on a meteoric rise. She is still in St Andrew’s College, the alma mater of team-mates Gillian Pinder and Chloe Watkins, but was elevated quickly out of the Irish Under-18s to the 21s last summer and now into the senior panel.

Overall, there are 16 of the World Cup squad of 19 involved. Shirley McCay continues to mull over whether she returns to the fold while Lizzie Colvin and Grace O’Flanagan are taking a step back for the time-being.

Ayeisha McFerran missed the uncapped series in Spain earlier this month but is back having finished her college hockey in Louisville with a fourth successive inclusion in the All-American representative team.