Emergency by-laws will come into effect on January 1st, 2019 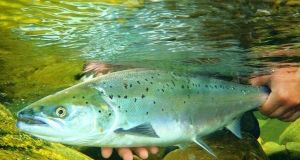 New Welsh by-laws will require release of all salmon caught by nets before June 1st.

In a dramatic move brought about by the perilous state of all salmon and many sea trout stocks, Natural Resources Wales (NRW) has implemented a suite of emergency by-laws which will come into effect on January 1st, 2019.

These will replicate the current level of protection for salmon stocks until a decision is made by the Welsh Government following NRWs application for the introduction of more protective catch controls.

The controls are intended to be in place for 12 months unless revoked or extended.

Peter Gough, NRW’s principal fisheries advisor, said: “It was our intention that the new catch control by-laws would be in place by now, however, that hasn’t happened and the expiry of the current National Salmon By-laws would lead to less protection for early-running salmon.

“We have not taken the decision to call for these changes lightly, but we have every confidence in the evidence which led to us making this decision,” he added.

A new Outdoor Ranger Tuam Angling Programme, geared to introduce young people in Galway to fishing, has received a strong uptake since its commencement in October. The initiative has obtained funding from the National Strategy for Angling Development to support its roll out.

To date, participants have enjoyed skill workshops, information sessions, fishing trips and guest appearances from well-known Galway-based international anglers in an effort to entice the younger generation into the pursuit.

Teresa Kelly from Outdoor Ranger Shop in Tuam, said: “The amount of young people that don’t know anything about angling, or that it’s even a sport, is shocking – especially as we have the finest rivers and lakes at our door step. This is the issue that the Outdoor Ranger Tuam Angling Education programme wants to highlight.”

Although fish kills in Irish waters were at a historic low last year, Inland Fisheries Ireland is calling for continued awareness in light of the Environment Protection Agency’s conclusion that water quality is once again in decline.

In 2017, 14 fish kills were recorded, affecting 7.8km of river with 2,123 mortalities. This is significantly lower than in 1987 and 1989 when more than 100 fish kills were reported. Fisheries officers carried out 26,000 inspections last year across agricultural sites, habitats, industrial sites, wastewater and water treatment plants, civil engineering sites and forestry sites.

Despite the positive drop in serious pollution concern remains with the EPA reporting a 3 per cent drop in river water quality since 2016 and a 0.6 per cent loss in high quality river sites.

Delph deals in the Bahamas

Delphi Club in Abaco, Bahamas has some prime dates available in 2019 from January through to June, and keep in mind January dates are still subject to $100 off per night. For booking purposes and rates, contact Delphi Club at PO Box AB20006, Marsh Harbour, Abaco AB-20006, Bahamas.

The final of the winter league, sponsored by Southside Angling, took place last weekend at Annamoe Trout Fishery in Co Wicklow. The 20 finalists caught and returned 32 fish, most of which were caught in the morning session before the strong wind and rain put the fish down.

A huge crowd gathered in St Mary’s Church, Navan for the funeral of Peter O’Reilly last Monday. Many tributes were paid to Peter as a world renowned fly fisherman and author who willingly passed on his vast knowledge, especially to the younger generation.

Peter will be missed – he was a man whom I greatly admired. Deepest sympathy is extended to his wife Rose and son Patrick. RIP.