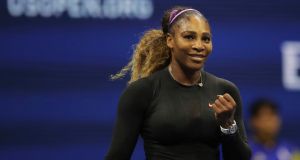 Serena Williams after defeating Elina Svitolina in the US Open semi-final. Photograph: AP

A spectacular sunset settled over Manhattan as Serena Williams, reluctant to embrace the evening of her own glowing career, blazed again to reach the final of the US Open, where psychic bruises from her meltdown in losing to Naomi Osaka a year ago have just about healed.

She beat the fifth seed Elina Svitolina, 6-3, 6-1, to get there, and there was palpable relief in her voice when she said courtside, “There were long games in the first set. She’s such a good player, two semis in a row. This is the biggest stadium for tennis on the whole planet, and I think of it that way. It’s such an honour for me and my opponent to play here.”

Her 101st win in New York equalled Chris Evert’s US Open record; she also has broken the record held by her sister, Venus, for the biggest gap between first and and most recent appearances in a slam final: 19 years and 362 days.

Curiously, Williams, who has won six titles here, would also become the eighth different slam champion in as many majors – given she has not won a tournament since becoming a mother in September 2017. That churn at the top is only the fifth time in the Open era there have been four different champions in the same season.

Martina Navritolova observed of 37-year-old Williams, the oldest slam winner in the Open era, “Her movement here has been fantastic, right on the money. If you let her get set, you’ve got problems. Her distance per point is better than anyone else’s here. But she is more vulnerable at the start of a match.”

Nerves and controversy, certainly, have dogged Williams at her home tournament down the years, but, with glaring exceptions, she has mostly prevailed in spite them. It did not happen in 2018 – but even in that debacle, there was a ticking omen. The only other times she has lost in finals here – 2001, 2011 – she bounced back to win the following year. And here she is again, teasing history.

Svitolina is no pushover for anyone, as Johanna Konta discovered in a tough loss in the quarters. She lost to the eventual champions in two slams this year: to Osaka in the quarters in Melbourne and to Simona Halep at Wimbledon. Losing to Williams is never a disgrace, however spirit-crushing.

On Wednesday, there was no sign of her emotions drowning her, as her power and placement overcame the game but outgunned Ukrainian. The power differential was most evident on the serve: Williams averaging 108.9mph, with a fastest of 119mph, Svitolina 100.9mph and 109.9mph

Williams did not have it all her own way, as she has done in nearly all of her previous five matches where she gave up only one set, to her promising young compatriot, Caty McNally in the second round.

If Elina Svitolina’s middle name was Serena, she would be the start to a good limerick. But there was no rhyme nor reason to her feeding Williams’ forehand crosscourt return so often – not that the American’s backhand is a weakness, so maybe the choice of where to test her was academic. If her British coach, Andrew Bettles, were allowed to, he might have had a quite word. Instead, he had to watch from the team box, mute, alongside Svitolina’s partner, Gael Monfils, who looked just about recovered from his epic five-setter the night before.

Svitolina applied enough early pressure to force Williams to fight hard for an opening hold from 15-40, and there was flickering trench warfare to come.

Working behind a decent first serve but vulnerable on her second hit from the hand, Svitolina had to red-line nearly every time she went to the service line, and she was plunged into a string of deuce points before Williams’ drilled a backhand down the line to lead 2-0 after a quarter of an hour.

A rare serve and volley, her first of the tournament, dug Williams out of a hole in the fifth game and, not without continued serious effort, she steadily dismantled her opponent’s game to take the first set in 41 minutes. - three minutes quicker than her quarter-final win over Qiang Wang who, crazily, failed to hit a single winner two nights previously.

As Williams grew in confidence, she worked her way steadily inside the court, Svitolina’s serve weakening noticeably in the second set. She dropped serve in the third game and found it impossible to get back into the contest.

Williams broke again with a couple of outrageous ground strokes for 4-1 after an hour, held to 15, blew her first match point on Svitolina’s serve but wrapped it up after an hour and 10 minutes with a killer backhand down the line three, as a packed Arthur Ashe Stadium rose to acclaim her.

Williams has had so many wins here – 101, against 12 losses – she could not recall beforehand that her first was against the Australian Nicole Pratt, in three sets in the first round in 1998. “Wow, I do not remember that at all,” she said when reminded of it before the match.

Pratt retired 11 years ago at 35 – which underlines Williams’s longevity. No wonder we take Williams for granted – which is something Svitolina was never going to do, even though she had little say, ultimately, in the course of the match.

The Ukrainian said before the match, “It doesn’t matter who is going to be in the semi-final, but obviously Serena is an amazing champion.”