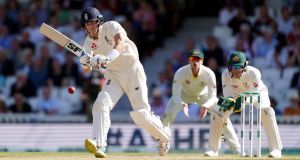 England set the stage for a series-levelling victory on day three of the final Ashes Test at The Oval, with new father Joe Denly leading the way with a career-best 94.

Denly, who joined wife Stacy for the birth of their second child after play on Thursday night, would have loved to mark a memorable week with a maiden century but, as consolation prizes go, his knock will take some beating.

Betraying no signs of sleeplessness the 33-year-old not only made a strong case for his international career to continue this winter – far from a done deal when he walked to the crease – but also played a decisive role in England’s 382-run lead at stumps.

In piling up 313 for eight at stumps, Ben Stokes (67) and Jos Buttler (47) with the key supporting roles, the home side made themselves heavy favourites to make it 2-2 at some point over the next two days.

To achieve their goal of a first outright win on these shores in 18 years Australia need to produce a chase considerably better than the 359 Stokes improbably hunted down at Headingley, though Steve Smith’s presence at number four makes just about anything possible.

Smith, who has 751 runs in six innings, refuses to stay out of the game and here claimed four catches at slip including one quite brilliant leaping one-hander late in the day.

But Australia were far from flawless in the field, with captain Tim Paine’s declining to review sound lbw appeals against Denly on 54 and Buttler on 19 while Stokes survived a couple of tricky chances.