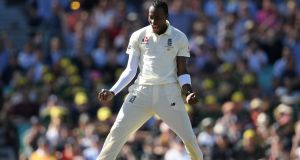 This was a day of few surprises but much activity. Jofra Archer took some wickets, six of them, to confirm his brilliant ascent as a Test cricketer. Steve Smith scored yet more runs; his innings of 80 was vital for Australia but it also constituted his lowest score of the series.

The destination of the Ashes has, of course, been decided and that may explain the nature of some of the cricket in this Test so far. Both sides are straining every sinew in the knowledge that the series can still be won or drawn and there are points to be gleaned for the Test Championship. They are all doing their utmost to win. But they cannot always hide their fatigue after this long – and wonderful – summer of cricket.

That does not mean that a dull game is in store. Far from it. In fact the Test is racing along so fast that all those ticket-holders for the last day are in dismay; at the moment England are ahead but a first-innings lead has guaranteed very little in this series. At the close they led by 78 runs with all their second innings wickets intact.

And yet it is plain that the players of both sides are flagging. Of course there are exceptions. Smith retains his insatiable desire to bat, which is hardly a source of astonishment. Perhaps more striking were the performances of Archer and Sam Curran (three for 46), England’s most potent bowlers on an idyllic, autumnal day.

England were bowled out for 294 in the morning and, well though Jos Buttler batted on Thursday, there was some exasperation that he played such a loose shot against Pat Cummins, Australia’s best bowler, when his beloved partner, Jack Leach, was looking so secure at the other end. Even so, his 70 was timely and a welcome reminder of what he can offer.

Then the Australian openers came and went according to their usual timetable. In the second over David Warner was caught behind off Archer after an England review and there were the accustomed celebrations although Stuart Broad might be forgiven for thinking that he had just been deprived of another Test wicket. This was the eighth time in nine innings that Warner has failed to reach double figures in the series, a record that he may not wish to recall too frequently. Soon afterwards Marcus Harris’s wretched run continued when he was well caught at second slip by Ben Stokes off Archer.

Then, as ever, Marnus Labuschagne and Smith restored the situation, adding 69 together without too much bother. Labuschagne scored more freely and more elegantly but, soon after being struck just below his right elbow, he was lbw to Archer for 48 when playing round a full, fast delivery.

Now Curran, who had already prompted a few false shots from Smith, intervened. He dismissed Matthew Wade, lbw, and yet again Smith began to wonder who was going to keep him company out there. Mitchell Marsh did so for a dozen overs until he pulled a short ball from Archer to long-leg where Leach completed a well-judged catch.

By now Curran had switched to the Vauxhall End and from there he looked more dangerous. He even induced Smith, on 66, to edge a cut shot; the ball flew above the head of England’s number 66 at first slip but Joe Root could not quite grasp the ball. But Curran is not easily deterred and like Australia’s unlikely main wicket-taker in England’s innings, Marsh, he is fresh. Soon he found himself on a hat-trick.

Tim Paine edged a straightforward catch to Bairstow. The next ball was perfectly pitched for a new batsman, full with a hint of inswing, and Pat Cummins was palpably lbw despite his decision to review. So Australia were labouring at 166 for seven and the England youngsters had been responsible for every wicket.

Now something truly surprising happened. Smith was out. Chris Woakes, until this moment anonymous, was called up to replace Curran. His first ball was straight and Smith, to the consternation of everyone at the Oval including the bowler, missed it and was unreviewably lbw. For the record Smith has so far scored 751 runs in the series, despite missing one match, at an average of 125.16.

England seemed so stunned by this turn of events that they offered a few easy pickings and there was a dropped catch by Leach on the boundary. But then Archer polished off the innings via a cunning, knuckle-ball yorker to Lyon and a breathtaking catch by Rory Burns in the gully, which accounted for Peter Siddle.

Burns and Joe Denly, upon his return from welcoming his new daughter, just managed to survive until the close. Denly’s happy day was confirmed when he was dropped before scoring by Harris. – Guardian