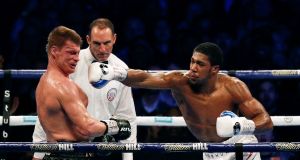 Anthony Joshua has targeted Deontay Wilder and Dillian Whyte in his pursuit of an opponent for his April 13th date at Wembley after clinically defeating Alexander Povetkin at the London venue on Saturday night.

He showed greater maturity and further signs of improvement as he absorbed the Russian’s aggression before adapting and ruthlessly stopping him in the seventh round to retain his WBA, WBO and IBF heavyweight titles.

Joshua had recovered from being hurt by a left hand in the opening round and initially boxed through a heavily bleeding nose as the 39-year-old Povetkin continued to both miss and land with further lefts.

It was from the third that the champion began to dictate the range and pace of the action, and the seventh when he changed the fight with a huge right hand before securing the stoppage after the first knockdown.

Povetkin had previously only lost to Wladimir Klitschko, and over the distance while the Ukrainian was at his peak, and while Joshua showed signs of vulnerability, his latest victory showed why many consider him the best in the world.

Wilder is scheduled to defend his WBC title against Tyson Fury on December 1st, but overlooking his domestic rival in favour of the American and Whyte, the 28-year-old Joshua said: “My number one [choice] would be Wilder. No contract’s signed.

“[There’s also a] mutual respect fighter to fighter, so if Dillian wants it then he’s more than welcome. Let’s finish the year on a high.

“We’ll put a poll out on Twitter; anyone’s welcome [as an opponent]. There’s always complications and [mandatory] fights we have to do, but sport is about what the fans want.

“Alexander Povetkin is a very tough challenger; he proved that. But I’ve come in here to have fun, do what I’ve been working on in the gym and give it my best.

“He threw a good right, but let’s not worry about that, that’s out the way, let’s figure out what’s happening April 13.”

Joshua’s promoter Eddie Hearn previously failed to secure Wilder as an opponent in a unification match-up that would be the most lucrative in the division, but insisted he would make a fresh attempt to do so.

He also works with Whyte and Dereck Chisora, who are expected to have a rematch in December, and while Fury has already claimed on social media that they will never consider him, Hearn said: “Joshua is a player in this game. The one stepping up and taking on great fighters.

“He is a special talent and a great model. There was a lot of pressure; Povetkin is a great fighter.

“Joshua’s a real world champion; we will go away now and try and make a fight with Wilder.

“[This] was about getting that big banana skin of Alexander Povetkin out the way.

“If it’s not Deontay Wilder then it will be Whyte here on April 13.”

1 Henshaw the only change as Andy Farrell names Ireland team for Paris
2 Gordon D'Arcy: Ireland must go after victory by frightening France into mistakes
3 Women’s GPA says demands on female GAA players are ‘increasingly unsustainable’
4 Warren Gatland: England players could miss Lions tour if not released for Japan warm-up
5 Cian Healy: ‘Realistically I got away with murder when I was younger’
Real news has value SUBSCRIBE