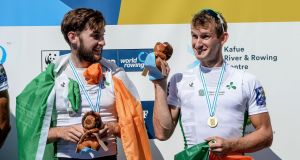 Poor Kris Brun. The Norwegian sculler fell ill the night before the World Championship final, the biggest race of the year, and had to be substituted. And then Paul interrupts Gary on television and gives the world the O’Donovan version.

“We were out on the town with them last night. We said ‘big day tomorrow, we need to be on form’. We headed away early, about two o’clock. We met the Norwegians on the way in and they said that by 3am Kristofer was buckled. It was best to make the substitution early this morning. He was hungover.”

It was pure fantasy, the kind of concoction which makes people love the Skibbereen men. That and wolfing down “‘schteak and spuds” and pulling like dogs.

What makes them exceptional is that this froth floats above a steely will. A metal that was never more on show than in their gold-medal performance here. They produced their best-ever 2,000 metres competing in unfavoured lane six in 30 degrees of heat and with a fiercely-fast Italy flying away from them from the start.

The Ireland lightweight double hit their stride before the first quarter was done, then hunted down and beat Italy in the final 500 metres.

“All year, from start to finish, through two World Cups and the European Championships we knew that this was the one we wanted to be fastest in. We wanted to take the best strokes in the fastest race we could this time. In fairness we managed to pull it off. We finished in front of everyone and we’re happy with that,” Gary said.

The next big aim for the crew is to qualify the boat for the Olympics by finishing well up the rankings at the 2019 World Championships.

“We’ve shown we have the potential to win it or to take another medal. Keep doing what we are doing really,” Paul said.

This was Ireland’s first gold medal in a World Championships in an Olympic event. Within 24 hours, Sanita Puspure would win the second.

She stressed the importance of the cohesion of the present Ireland team.

“The team is really good now and we have a great dynamic in the team. We all get on really well. That helps. A good environment helps [us] to train harder as well.”

Gary O’Donovan also spoke of the work ethic of the team, how four boats had reached finals in Plovdiv, three of them in Olympic events.

“They’ve taken fierce responsibility in themselves,” he said of the eight crews here.

The women’s pair of Aifric Keogh and Emily Hegarty, the third Olympic-class finalists, finished sixth in their A Final. They were unsparing in their analysis of not performing as they wished in the final, but are determined to keep on their upward trajectory. Their sixth is comfortably within the qualification places for the Olympic Games if they match it at the 2019 World Championships.

Philip Doyle and Ronan Byrne annexed ninth place for their new men’s double, taking third in their B Final: this too would be inside the cut for Olympic places next year.

The three other Olympic boats all battled hard in their C Finals: the women’s double of Monika Dukarska and Aileen Crowley and the lightweight double of Denise Walsh and Aoife Casey won theirs and both crews finished 13th; the men’s pair of Shane O’Driscoll and Mark O’Donovan took 16th. Every single member of those crews spoke of looking forward, as did the four 21-year-old men in the non-Olympic lightweight quadruple who were fifth in their A Final.

Ireland placed eighth on the medals table for this World Championships. In Puspure and the O’Donovan brothers, the other team members can see every day the gold standard in rowing.

Paul’s joy in breaking through to the very best form was infectious.

“During the warm-up for the final any time we had to stop and turn, we’d turn around to each other and say, ‘Jeez this is class. Really feeling good!’”

Gary made the call to move. “We had just great strokes and kept chucking on through. The rowing was so in time that it felt easy to do. We were confident we could keep it going through to the end.”

3 Liverpool leaning on Salah more than ever right now