Anthony Joshua turns the alarm clock off to prepare for Povetkin 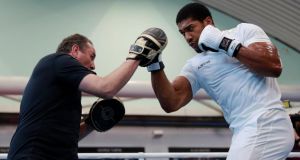 Anthony Joshua on the pads with trainer Robert McCracken ahead of his heavyweight clash with Alexander Povetkin. Photograph: Andrew Coulridge/Reuters

Anthony Joshua expects to be in the best shape of his career against Alexander Povetkin on Saturday after ditching his alarm clock in favour of long lie-ins. The WBA, IBF and WBO champion has also scrapped his early-morning runs and introduced specific eye exercises into his training regime after sports scientists found he could do more to improve his recovery and performance.

“We have looked at stuff like sleeping, the amount of time I spend on my phone, my eyes – your eyes have muscles so you have to work your eye sockets – and recovering between sessions,” Joshua said. “You know Cristiano Ronaldo is 33 but has the body of a 21-year-old? It’s about preserving your body. I could go in there and knock out Povetkin in a round or two but then there is the eight weeks of intense sparring, doing 200 rounds, you have to protect your body.

“You can kind of predict if I tell you seven days out of 10 I’m feeling rough, by the eighth day you’re going to know to ease it off before you crash.”

Joshua has learned from other modern greats that the old ways were not necessary best. “Boxing is old school,” he said. “But when I watched a Manny Pacquiao documentary he does the same thing. Floyd Mayweather also trains when he is ready, same with Vasyl Lomachenko.

Joshua, who now wakes up naturally at 8am, added: “I tried it and feel much better. It looks lazy but you’re still getting the same amount of work done and in a better way.”

Joshua, who is 29 next month, insists he is ready for Povetkin after the hardest sparring of his career. “It has been tough, I am not going to lie. My body is in pain. I’ve done 15 rounds, 13 rounds, 12 rounds, back to back but one thing I do know is I have got a deep well, a lot of fire.

“I have got enough heart to slug it out with Povetkin, same with Wladimir Klitschko. Even though some people may be more skilled, have longer arms or be taller, sometimes it is about what is in your heart. And I know I have got that for sure.”