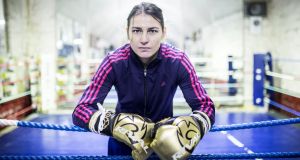 In the new documentary entitled ‘Katie’, Katie Taylor talks about the hardship she endured when she split from her coach and father Pete after he separated from her mother

In the 10 or so years up to the Olympic Games in Rio, Ross Whitaker didn’t see much point in making a documentary about Katie Taylor, her story, after all, was purely one of unremitting success. “And if someone keeps winning,” he said, “where’s the drama?”

But 2016, of course, changed all that, Taylor enduring enough drama in both her personal and sporting life to almost break her. It was when she began trying to rebuild from it all, soon after she turned professional, that she allowed Whitaker’s cameras to start following her. The result is Katie, a beautifully crafted 90-minute telling of her story.

Whitaker’s greatest triumph, perhaps, was putting Taylor sufficiently at ease for her to open up and speak so candidly and emotionally about the impact of her defeat in Rio but, most of all, about the pain of the split from her father and coach Pete after he had separated from her mother Bridget.

A harrowing impact it had too, Taylor describing her first day setting off for training without her father when “the tears were streaming down my face”. “I went from seeing him every day to not seeing him at all,” she said, admitting that her boxing suffered immeasurably in his absence. “I knew when I made the decision to step away from my da that it would cost me a lot. I just felt every time I stepped in the ring without him, I was missing my right arm.”

But she believed it was the right thing to do, some things mattered more to her than winning titles. “I felt my da was someone I could no longer work with. My success in the ring doesn’t mean as much as my integrity.”

Later, though, she talked of having a “great” meeting with her father, the first in a long time, and how she hoped it was “the start of restoration”. But what she seems to find harder to recover from is her Rio experience. It haunts her.

There’s a scene in her family home in Bray where she brings the cameras in to the “trophy room”. The collection of silverware is breathtaking, the room jammed, but instead of the collection prompting memories of her greatest days, all she notes is what’s missing. “The Rio gold. It’s eating away at me. I don’t know how to get over it.”

But when she looks forward she thinks only of unifying the professional lightweight division by winning all four belts, the start of that phase of her life taking her to Vernon, Connecticut, her training base and home to her coach Ross Enamait. A lonely life it was too in the early stages, Taylor spending much of her time by herself after she’d finished her gruelling training sessions at the gym and lengthy runs. In time, though, she got to make friends through the local church she attends.

And religion, of course, plays a major part in her life, her mother often reading passages from the Bible to her in her hotel rooms before fights. When she was feeling poorly with the flu before her world title fight with Anahi Sanchez in Cardiff, Bridget sat with her and prayed to God “for accuracy in Katie’s punching”. Sanchez’s mother, you’d guess, was praying for the same, giving God the mother of all dilemmas.

Watching Taylor embark on her professional journey, there’s a sense of her being back where she started, once again being the one burdened with the expectation of winning women’s boxing respect and a profile that will allow it prosper. In the midst of all that is the interminably frustrating struggle to find worthy opponents, while her manager Brian Peters pointed that she actually initially lost sponsors after turning professional, rather than gaining them, because for them her whole story was about the “Olympic dream”.

The battle goes on, then, but she’s never shied away from one. And no matter how successful, she always feels she can be better. “There’s a lot of room for improvement,” she tells a group of her childhood girlfriends after another victory. “There is chicken, there is,” says one, pointing to the cut over her eye. Taylor erupts laughing. You’d guess she trained even harder in the gym next day.

One of a kind.

* Katie will be released in Irish cinemas on October 26th.