Keith Duggan: world’s fascination with McGregor could be fading 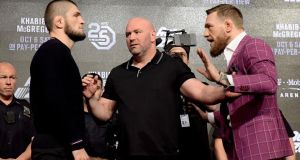 Dana White, the president of UFC, looked taken aback when he appeared on ESPN to talk about Conor McGregor’s reliably profane and eccentric return to the world of mixed martial arts. “He al-waaaaaays sounds like that,” declared presenter Stephen A Smith with mock weariness after they’d watched footage of the Irish fighter doing his press conference shtick.

You could understand White’s concern at this moment. ESPN is as mainstream as Modern Family. The MMA movement has been brilliantly successful in shedding the barbaric image of its early days and moving towards its status as a bone-fide mainstream entertainment. McGregor’s dandified braggadocio and his electrifying performances in the ring have been instrumental in establishing UFC as an attractive commercial entity. But if ESPN are calling out a McGregor show as tired, then the jig is up.

White is like the Simon Cowell of the MMA scene, never quite managing to disguise his delight and incredulity at the world’s willingness to buy this stuff again and again. He spent half of Thursday’s 40-minute press conference in Radio City Music Hall guffawing and shaking his head as McGregor wildly insulted his opponent, Russian fighter Khabib Nurmagomedov, while shamelessly hawking his new whiskey.

But on ESPN White was keen to dispel any notion that this was just more of the same from the Irishman. “I don’t know if he always sounds like that. That was the darkest press conference I’ve ever been part of.”

The odd thing is that both host and guest were right. As a public exchange, the event was pretty bleak and dark. But it was one we’ve all seen and heard before. And it provoked one thought: just what is going on with Conor McGregor?

When the two men meet in Las Vegas on October 6th, it will mark McGregor’s first return to the octagon since November 2016, when he defeated Eddie Alvarez. His only competitive bout since then was the extraordinarily lucrative and unpleasant circus boxing match against Floyd Mayweather.

Aside from that, McGregor’s most notable public appearance was to land himself in a Brooklyn jail cell in April for attacking a stationary bus containing UFC fighters in an attempt to get at Nurmagomedov, breaking away from his posse to fling a metal trolley through the window, injuring several occupants and setting in motion a series of civil law suits which have yet to be settled.

McGregor’s outrage was sparked by reports that Nurmagomedov had allegedly confronted and struck a sparring partner of his Artem Lobov. He was at home in Dublin at the time, and instantly ordered that the private jet be fuelled up so he could fly across the Atlantic – while maintaining his state of righteous anger – to avenge Lobov.

For McGregor’s fan base the action was the last proof of his valour: here was a guy willing to dash across the ocean – and to then go through immigration, to then endure the traffic snarl in from JFK to the Barclays Centre – just to stand up for a mate.

And maybe it was loyalty that prompted him to act. Or maybe he was just at home in the gaff, watching Daithi on the cookery section of the Afternoon Show when he heard about the rumpus and decided to round up the gang. Either way, it was an expensive move.

At the time White described the attack as the “most disgusting thing that happened in the history of the company”. But less than six months on the footage of McGregor smashing the bus window has now been incorporated into the promotional films for his upcoming fight with Nurmagomedov. “It is part of the storyline,” he told Smith. “It is what it is.”

And it was a storyline that McGregor milked for all it was worth this week, dismissing Nurmagomedov as a “fake little rat”, taunting him about his ties with Ziyavudin Magomedov, a Russian billionaire who is jailed and awaiting trial for accusations of embezzlement in the construction of the World Cup football stadium in Kaliningrad.

Magomedov was the chief financier of the equivalent of UFC in Russia: Nurmagomedov is the rising star of MMA in an untapped market. But it was McGregor who was the guest of Vladimir Putin before the World Cup final in Moscow this summer.

And he told the press conference that part of his motivation to beat Nurmagomedov was for “the people of Russia”. He derided Nurmagomedov’s region, called his father a snivelling coward, called his opponent a c*** more than once. Nobody blinked. It’s bizarre: McGregor is a mainstream sports figure now. If any comparable star of football, basketball, tennis, or American football spoke like that the sponsors would flee and he or she would be forced to apologise.

But McGregor gets a pass because nobody expects anything different from him. He switched from wound up and hysterical to salesman smooth with disconcerting swiftness.

Through it all the Russian fighter said little, shrugging as McGregor ranted and jeered and retorting: “This is everything what I expected.” When McGregor indulged himself with a brief history of his clan’s fearless historical battles against the English invaders, Nurmagomedov coolly interrupted with: “Then why do you switch your language? Why do you speak in English?”

In other words, how come you didn’t even hold on to your native language? (McGregor, as it happens, went to a Gaelscoil: the moment stung deeper).

McGregor is sharp, mugging up on his opponent’s background and associates in order to produce the stew of insults and put-downs and humiliations. The tragedy for him is that all of that sharpness and verbal energy seems locked into a worldview that is increasingly vile and grim and small.

McGregor apologists will say that he is merely promoting the fight. And it was true: he did all the work. The strange thing was that the less Nurmagomedov said, the further McGregor had to reach. The Russian merely had to sit there while McGregor gave the kind of maniacal performance now obliged by his reputation.

But this time it never felt as if he really wanted to be there. During that meteoric rise, an antic energy and mischievousness characterised his appearances. That was missing in New York. He was cranky because there were no fans in the arena, and he made pointed reference to his probation and the legal cases coming down the track. He has signed a contract for a further six UFC fights. Plenty see Nurmagomedov as a strong contender to defeat the Irishman when they meet next month.

Either way, it is hard to escape the sense that the world’s fascination with McGregor has begun to fade. And UFC is part of the mainstream now. Kids are watching this stuff. Wheeling out “the King”; its cursing, megalomaniacal wild Orish man with his very own brand of whiskey is a UFC trick that is starting to look old and ugly and a little embarrassing . Even McGregor seemed a little bored. Heavy lies the crown.