Jose Aldo - I never turned down Conor McGregor rematch, my coach did

‘It’d be nice to have the rematch, but it’s not something that would take away my peace’ 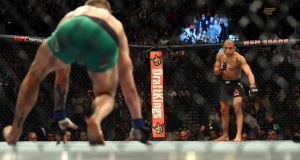 Jose Aldo before his fight with Conor McGregor in December 2015. Photograph: Getty Images

UFC featherweight champion Jose Aldo says that he is at peace with the prospect of him never getting the chance to fight Conor McGregor again.

The Brazilian fighter - reinstated as the official 145-pound champion last month after McGregor was stripped of the belt due to his inactivity in the division - was KO’d after 13 seconds by the Irishman in their title fight 12 months ago.

In the interview, Aldo - who beat Frankie Edgar by a close unanimous decision in his last fight on July 9th - claims that he has never turned down a fight. And that being unable to speak English means that much of what he says is often “misinterpreted or mistranslated”.

As for why he doesn’t learn English, like a number of the other Brazilian fighters in the UFC have done, Aldo says that he does not live or wish to live in the United States.

When asked about declining the offer of a McGregor rematch at UFC 196 after Rafael dos Anjos got injured, forcing their lightweight title contest to be cancelled, Aldo explained that his coach made the decision.

“No, I didn’t turn that down. (My coach)Andre Pederneiras turned down that fight and wouldn’t let me take it. I’ve never personally turned down any fights.

“I never stopped being the champion. When I lost to Conor, he should have rematched me right away. Like I’ve always said and done, the champion is the guy who defends the belt against all challengers. Guys who run from title defences are not champions. All Conor did was he beat the champion. But he never did what he had to do to become the champion. He’s never been the champion of the featherweight division.

“He’s two-faced. He says a lot of stuff to the press, but behind-the-scenes, he turns down fights left and right. He picks opponents, he picks events. He’s not willing to face challengers the way a champion should be ready to face challengers. That’s not a true champion. He spent a year without defending the belt, so his math doesn’t add up when he says, I was the champion for less than 12 months.

Aldo was expected to fight Max Holloway at UFC 208 in Brooklyn next year, but he also explained in the interview that the fight will no longer be going ahead.

He claims that his next contest will be in early March in an interim lightweight title fight. His camp have often mentioned his desire to eventually make the move up in weight, but if he gets his wish this would be his first UFC lightweight contest. Another weight division in which the belt is held by McGregor.