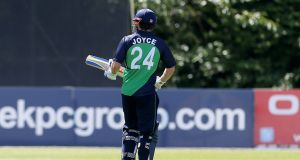 Ed Joyce during the 4th One Day International against Afghanistan earlier this year at Stormont, Belfast. Photograph: Matt Mackey/Inpho

Joyce is one of 10 players handed A contracts, while O’Brien is one of nine B contracts.

Joyce, 38, will continue his connection with Sussex, playing in the County Championship on a cover basis when his Cricket Ireland contract allows. O’Brien, 35, is out of contract after being let go by Leicestershire.

There are also three newcomers to full contracts in Irish player of the year John Anderson, Andrew Balbirnie and 21-year-old leg-spinner Jacob Mulder.

Balbirnie, who turns 26 next week, was let go by Middlesex last summer and missed a full season of cricket due to a major hip operation.

He spent the early part of the Australian summer with the Randwick Petersham club in Sydney, scoring 382 runs, with a top score of 121.

Joyce’s decision to play in the interprovincial series is a huge boost to the competition as it prepares to move up a gear. The three-day competition will have first-class status from next summer while the 50-over games will be recognised under the List A classification.

Explaining his decision to concentrate the remaining years of his cricket career in Ireland, Joyce said: “Coming back to play full-time for Ireland and also play in the interprovincial series was a big decision but also quite an easy one in the end.

“Test cricket is the pinnacle for any cricketer. Ireland has a huge opportunity in the next few years to play at the highest level and I want to be part of the team that plays Ireland’s first Test match,” said Joyce.

“With Ireland’s fixture list growing year on year it makes sense to come back at this stage.”

“Also now that the interpros have first class and list-A status, I wanted to be involved right from the start and lend my experience to that competition.

“We’re at the stage where we need to be more consistent and competitive as an international side and we also require the interpros to improve and provide a steady stream of players ready to perform well for Ireland. My focus in the next few years while I’m still playing, is to help us achieve both of these goals.

“It’s a really exciting time to be an Irish cricketer and I can’t wait for the 2017 season to get going.”

Ireland have ODIs in 2017 against New Zealand, Bangladesh, and West Indies on home soil, as well as playing England at Bristol and Lord’s.

“We are delighted Ed has agreed to return home to play in Ireland’s inaugural season of domestic first-class cricket.

“It has been one of our strategic objectives to bring players back home from England and for Ed to be the first is very appropriate. He has given great service to Sussex as an outstanding batsman and leader, and we are grateful for their support to Ed’s Ireland career over those years.

“Ed will not only be based here in Ireland training with the national squad, but will also help our next generation of international cricketers in a specialist batting and leadership coaching role, working with the Shapoorji Pallonji National Academy and Ireland youth squads as well as mentoring some national performance squad players.”

Tiger Roll still on track for Aintree after placing fifth in Boyne Hurdle 16:17
Andy Farrell recalls 13 players to Ireland squad ahead of England clash 15:11
Leaving Cert prep forces Beibhinn Parsons out of rest of Six Nations 15:01
Kieren Westwood: ‘I feel obliged to clear my name and defend myself’ 14:01
All in the Game: No Moore medals for Steven Gerrard 12:34
Here is your handy guide to sport on television this week