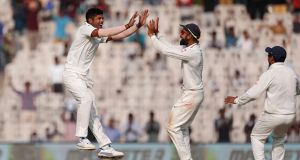 And so it ends with a record-breaking whimper. No Test team have ever lost by an innings having scored as many as 477 in their first knock but England managed that with room to spare.

The game was lost with 10 overs to spare and the margin was a monumental, a humiliating innings and 75 runs.

Ravindra Jadeja, the more straightforward of India’s spinners, finished with career-best figures of seven for 48, a reward for skilful persistence and a consequence of some wanton, brain-dead batting. He was the man of a match that should have been consigned to the record books as a quirky run-fest. Instead it will be remembered for a spineless capitulation triggered not by a batting line-up that does not care but one which has been drained by the demands of an exhausting tour and overwhelmed by the constant excellence of an India side who have ruthlessly exploited their frailties. The result was that a procession of batsmen, all with accomplishments at this level, performed like callow novices.

There was a nasty parallel with the Test match in Dhaka many, many moons ago. In fact it is only eight weeks since the England openers, Alastair Cook and Ben Duckett (remember him?), finished one session on 100 for no wicket against Bangladesh, whereupon England went from dominance to dominoes. Just a gentle nudge was required and they all fell over for 164.

This was probably a more incomprehensible collapse, in which England lost their last six wickets for 15 runs. The bowlers in Chennai may have been of higher quality but the pitch was so much more benign than in Dhaka, as the scorecard hints. One difference, however, was that the England dressing room had nothing left to give in Chennai; their bodies may still ripple with muscles but their minds are exhausted. No matter how reliable the surface they found a way to get out.

Cook and Keaton Jennings took England safely to lunch with deceptive ease. The two lean left-handers had taken the score to 97 for no wicket and at times it was hard to tell one from the other – except when the reverse sweep was employed. That was a cast-iron indication that Jennings was on strike.

There were some alarms. Cook on four was dropped behind the stumps against Ravi Ashwin, who beat the bat on numerous occasions in pursuit of his second wicket of the match, which, amazingly, he never found. Jennings was composed against the spinners, the likes of which he has seldom encountered at Chester-le-Street.

It was curious that Virat Kohli took so long – 70 minutes – to introduce Jadeja since the left-arm spinner has tormented the England captain throughout the series, dismissing him six times. Jadeja’s first ball elicited an lbw appeal, a subsequent review but an unsuccessful one.

However lunchtime represented the zenith of the England innings. After the break Cook was caught at leg-slip off Jadeja glancing what was an apparently innocuous delivery which was missing leg-stump by nine inches. But this was not just bad luck. Cook has been out this way before; the Indians knew that; so did Cook, therefore this can be construed as poor shot selection.

At his alert best Cook would have ignored that delivery.

Three more fell in swift succession and Jadeja was always involved. Jennings was caught and bowled; Joe Root swept as he has done frequently in this series and India’s review was successful this time. Soon after Jonny Bairstow somehow managed to chip a leg-side delivery from Umesh Yadav over midwicket, where Jadeja sprinted back to take a brilliant catch, which was a testament to his athleticism.

For almost 20 overs Moeen Ali and Ben Stokes stayed together, with the former in no mood to restrict his strokeplay. They guided England to tea and through the next 25 minutes after the interval. A safe haven after a tortuous winter journey was in sight. But then Moeen fell to Jadeja in a manner that will haunt him and which must have exasperated his colleagues. Down the wicket he came and his attempt to hit the ball over mid-on failed wretchedly; Ravi Ashwin took the catch. In this match Moeen has scored 190 runs, a startling achievement, and he has been dismissed playing two of the most horrendous shots imaginable. Square that circle if you can.

That aberration might have been forgotten if England had managed to save the game but now that dressing room was fearing the worst and then experiencing it. India closed in on their prey expertly and without mercy; Virat Kohli had the right bowler for every batsman. Usually it was Jadeja, who soon induced an emasculated Ben Stokes to chip to midwicket.

Now the dominoes were falling fast. Liam Dawson was duped by a perfect, undetected googly from Amit Mishra. For Adil Rashid, Yadav was the man; the very first delivery with the second new ball finished with a gentle catch to cover (Jadeja, of course)and then the left-arm spinner polished off the tail. By now Jadeja seemed capable of turning the ball on glass so that Stuart Broad and Jake Ball could, at least, claim to be the recipients of good balls, a luxury denied most of their superiors.

So England head back home, a disconsolate bunch, utterly outplayed, numbed by their capitulation and burdened by the gnawing realisation that they crumpled in the last two matches after their excursions to Dubai. In some quarters Cook will be held responsible for every shortcoming, for that is the way of the world. Some of that criticism will be intemperate but now the firm expectation is that Cook will be at Lord’s in July for the Test against South Africa as an experienced opening batsman, who will be glancing over at his captain at the toss to see whether he should put on his pads.

Manchester City see off West Ham without needing to leave first gear 22:31
Rashford ‘touch and go’ to play again this season – Solskjær 22:30
Limerick advance to Munster U20 football semi-final after beating Tipperary 21:20
Willie Mullins manoeuvring his Cheltenham forces into position 19:30
Laurina finishes third behind Elfile in Punchestown mares’ hurdle 19:15
Here is your handy guide to sport on television this week