Washington’s playoff hopes take a hit after loss to Carolina 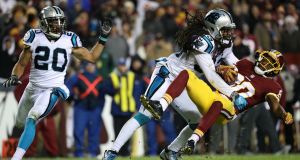 The Carolina Panthers dented the Washington Redskins’ play-off hopes with a 26-15 win at FedEx Field.

Cam Newton threw for 300 yards and two touchdowns and Jonathan Stewart had 132 yards on the ground in a comfortable victory for last season’s beaten Super Bowl team, who are unlikely to return to the play-offs.

The Panthers scored straight after half-time after Wes Horton’s strip-sack and recovery — the defensive end was dragged down just short of the line but Newton hit full-back Mike Tolbert for a touchdown two plays later.

Skins tight end Jordan Reed was ejected at the end of the third quarter for punching Panthers safety Kurt Coleman and two more Hopkins field goals were in vain, with his efforts matched by Scottish-born Gano before Kyle Love forced and recovered a Jamison Crowder fumble to ice the game.