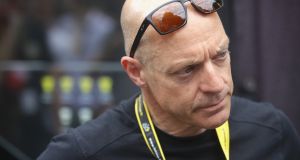 Team Sky coach Dave Brailsford: “Dr Freeman told me it [the drug] was Fluimucil, a decongestant you put in a nebuliser,” he told a UK parliamentary committe. Photograph: Chris Graythen/Getty Images

British Cycling and Team Sky were facing more questions on Monday despite Team Sky coach Dave Brailsford finally revealing that the mysterious package delivered to Bradley Wiggins in 2011 contained nothing more than a legal decongestant.

Brailsford claimed at a culture, media and sport select committee hearing into doping that he had been told by the Team Sky doctor Richard Freeman that the mysterious Jiffy bag, which has been at the centre of a long-running UK Anti-Doping (Ukad)investigation, contained the mucus-clearing drug Fluimucil – and that a paper trail would back him up. “Dr Freeman told me it was Fluimucil, a decongestant you put in a nebuliser,” Brailsford said. “I couldn’t see any anti-doping rule violation.”

However, it is understood that as yet there is no independent verification of Brailsford’s claim, with Ukad unable to unearth such paperwork despite weeks investigating British Cycling.

Brailsford was immediately put on the back foot as he struggled to explain why the British Cycling assistant Simon Cope flew from Manchester to Geneva and up La Toussuire in June 2011 to deliver medication that could be bought over the counter in France for €8 – or why it took 10 weeks, a Ukad investigation and a select committee hearing for him to reveal one simple medical fact.

Yet that evidence appeared to be contradicted by the former British Cycling technical director and Team Sky head coach Shane Sutton, who said that Cope “took something back with him, and I got a lift to the airport with him”.

Earlier Sutton had revealed for the first time that Wiggins was given the medication contained in the package on the final day of the Criterium du Dauphiné in 2011 – a race that he led and then won. But he said he had no idea whether Wiggins had received an injection at the time.

Three hours of testimony from Brailsford, Sutton, the British Cycling president, Bob Howden, and the board director Dr George Gilbert, also provided more heat than light as well as a number of inconsistencies including:

• Sutton had initially said that Wiggins was treated at the Dauphiné “for a long-term illness”, saying he had allergies for years, before changing his mind and saying it was possibly a chest infection.

• Fluimucil, while legal, is an unlicensed medicine in the UK and not generally available, yet Brailsford said his riders used it “on a regular basis”. Unlicensed medicines, called “specials”, can be supplied in the UK in certain circumstances, according to the Medicines and Healthcare Products Regulatory Agency.

• Sutton insisted he had no idea what medical treatment Wiggins had taken – including the powerful asthma drug triamcinolone before the Tour de France in 2011 and 2012 – while head coach of Team Sky despite being his close friend and mentor.

However, Sutton denied that Wiggins had ever done anything wrong, telling the MPs: “Knowing the kid for many, many years, as far I’m concerned he never worked outside any rules. Given the fact Dave Brailsford was probably the pioneer behind clean cycling and created what is probably the cleanest team in the world and set up a zero-tolerance programme, there was no wrongdoing. I would put my life on Brad Wiggins.”

“You sitting there being British should be embracing the success they’ve achieved and how they’ve achieved it, rather than looking for something that’s not there,” he said. “This team, from Laura Trott to Bradley Wiggins to Jason Queally that won that gold in Sydney, Sir Chris Hoy, Pendleton, Cooke – they’ve all done it clean.

“You’ve actually upset me there in the fact that you’ve not embraced the success of British cycling as a whole. I’m astounded that you would make that sort of tone, suggesting that we’ve not done anything by the book.”

Earlier Lucas had also expressed his frustration at Howden, telling him that the last few months had been a “disaster” for British Cycling. “This story is casting a massive shadow,” he added. Howden could barely muster a defence, replying: “I would agree but we have to stay strong.”

Before he left Brailsford conceded to the MPs that he hadn’t covered himself in glory in recent weeks, but insisted: “There is no question of any cover-up. There was no intention to mislead in any shape or form.”

But after this series of unconvincing performances the gap between his high-performance rhetoric about the Sky machine and the apparent reality behind the scenes has never seemed wider. Guardian Service