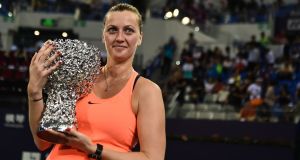 Petra Kvitova of the Czech Republic poses with her trophy after winning the women’s singles final match against Elina Svitolina of Ukraine during the 2016 WTA Elite Trophy Zhuhai. Photo: Getty Images

Petra Kvitova is undergoing surgery to her left hand after fighting off an intruder who held a knife to her throat in her home.

The 26-year-old two-time Wimbledon champion said she was “fortunate to be alive” after defending herself during a robbery in her apartment in Prostejove, Czech Republic.

The assailant, who is still being sought by police, posed as a utilities man to gain access to the apartment before a struggle ensued.

The full extent of the injury to her racket-holding hand is still to be declared, but the operation to attend to the injuries is expected to take around four hours.

The intruder fled the scene after stealing 5,000 Czech Koruna (around €185), according to sport.cz.

“I am shaken, but fortunate to be alive,” Kvitova wrote on Facebook.

“The injury is severe and I will need to see specialists, but if you know anything about me I am strong and I will fight this.”

Kvitova thanked supporters for their messages, described the attack and said that her left hand was injured as she defended herself.

“Thank you for all your heartwarming messages,” she added.

“As you may have already heard, today I was attacked in my apartment by an individual with a knife.

“In my attempt to defend myself, I was badly injured on my left hand.

“Thank you all again for your love and support and now I would appreciate some privacy while I focus on my recovery.”

Her publicist Karel Tejkal said it was not a targeted attack.

He told sport.cz: “It is apparently a random criminal act, Petra is now in the care of doctors.”

Fellow Czech player Lucie Safarova, speaking at an event which Kvitova had been due to attend, told Czech public radio: “Things like that are shocking to us all. It could happen to any one of us.”

Earlier on Tuesday Kvitova announced on Twitter she would be missing January’s Hopman Cup in Perth, Australia, as she continues to recover from a foot injury.

The Australian Open begins in Melbourne on January 16th and her participation could be in doubt, particularly following Tuesday’s events.

Kvitova has two Grand Slam titles, winning Wimbledon in 2011 and 2014.

She has two WTA singles titles in 2016 and a career total of 19, with career prize money of close to $23 million.

She is currently ranked 11th in the world.

Monica Seles was stabbed on court in Hamburg in 1993, resulting in a two-year absence from the sport.

Russian Anna Chakvetadze was assaulted with her family in their home in Moscow in 2007. She retired in 2013, aged 26.

Chakvetadze told the New York Times she was “very upset” when she heard of the attack on Kvitova.

“I got an arm nerve injury after they tied it up with TV cable, and it took one month to feel my arm again,” Chakvetadze said.

“With a knife, it’s even worse. I hope she will recover as soon as possible, mentally and physically, but it would not be easy.”

Solskjær backs Martial to get 20 goals for Manchester United for first time 22:30
Graham Burke’s five-goal salvo tears 10-man Cork apart 22:23
Dundalk take the points but Shelbourne pointers are positive 22:24
Munster break Zebre resistance in second half 22:06
Ireland Slam England at the Gardens to open up Grand ambitions 21:56
Here is your handy guide to sport on television this week