John Jermyn to bow out against France at Garryduff 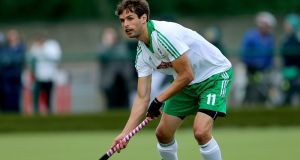 Ireland’s record goalscorer, John Jermyn will formally hang up his international hockey stick in front of his home crowd at Garryduff on Thursday evening when the men’s side take on France in a test match.

The 35-year-old scored 92 times in 178 games, culminating in the 2016 Olympic Games. He has not been part of the international setup since then but has been training for the past month with Ireland in anticipation of this big send off.

It is not the first time that he has tried to retire. In the wake of the 2012 Olympic qualifiers - when Ireland felt to a heartbreaking last minute defeat to Korea - Jermyn did send on notice of his intention to retire to Hockey Ireland. But the missive was not formally acted upon by the governing body and no further public action took place to recognise the retirement.

He did not play for Ireland between 2012 and 2015 but some spectacular league form for Cork C of I saw a couple of, initially tongue-in-cheek, suggestions of a recall ahead of the Rio Olympics.

Coach Craig Fulton soon explored the possibility of getting him back in the mix in May 2016 ahead of the Games where he added two more penalty corner goals to his tally.

One of the Ireland all-time greats, Thursday marks a fitting way to end the Cork native’s career at the venue where he first picked up a stick.

“I can’t think of a better way to call an end to my career than in front of a home crowd in Garryduff where I first started training 32 years ago with my hero Reg Treacy,” Jermyn said of the fixture.

“It has been a huge privilege to represent Ireland for the last 16 years, give or take a year. Those years have been an amazing journey throughout which I have made a load of lifelong friends in my teammates. The highlight of which was fulfilling a lifelong ambition to play in the Olympics.”

The series is also the last one for coach Fulton before he takes up a role with Belgian hockey.