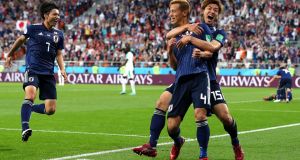 Midfielder Keisuke Honda came off the bench to salvage a 2-2 draw for Japan against Senegal, as both teams were locked at the top of Group H following an entertaining encounter on Sunday.

Veteran Honda (32) who became the first Japanese player to score in three different World Cups, replaced Shinji Kagawa in the second half with his team down 2-1 and fired the equaliser in 12 minutes from time after an error by Senegal goalkeeper Khadim N’Diaye.

Senegal thought they had claimed all three points as Moussa Wague drilled the ball into the top of the net in the 71st minute to make it 2-1, after Sadio Mane’s fortuitous first-half opener was cancelled out by Takashi Inui’s curling shot. But Honda ensured things ended level and deservedly so.

The result leaves both teams, who beat Colombia and Poland respectively in their opening matches, on four points from two games and within reach of a spot in the last 16.

“They were avoidable goals, that’s clear,” Senegal coach Aliou Cisse said in a blunt assessment of his defence. “The best team was Japan, we have to admit that.”

“We didn’t play a great game but we didn’t lose. . . I have confidence. Our team has the quality to face Colombia,” he added, looking forward to Thursday’s meeting with the South Americans in Samara. Japan play Poland in Volgograd.

“We’re a bit disappointed . . . there was a way to win this match,” added Mane, who failed to exert his influence despite scoring. “We started well, we created a lot of opportunities, we were quite dangerous . . . we now have a decisive match to qualify next week.”

Senegal’s back line might have faltered towards the end but they began strongly and their robust defending neutralised any early threat that the Japanese front line posed, allowing their own attackers to push up in numbers.

The Africans went ahead in the 11th minute, although there was an element of luck to their opener.

A poor headed clearance landed right at Youssouf Sabaly’s feet and although goalkeeper Eiji Kawashima managed to parry the defender’s stinging shot from the left, the ball rebounded into the net off Mane’s knee.

Japan regained composure and responded with a well-taken goal with their only shot on target in the opening period to level the score at 1-1.

Yuto Nagatomo controlled a long pass with a deft first touch before rolling the ball into the path of Inui, who cut in from the left and fired a curling shot past a diving N’Diaye.

Senegal appeared to step off the gas towards the end of the half, and the effects were still evident after the restart, as they resorted to long-range efforts that failed to test the Japanese goalkeeper.

They nearly paid for allowing their opponents to run at them, as Yuya Osako narrowly failed to connect with a pass across the box on the hour mark before Inui’s powerful shot struck the bar with the goalkeeper beaten.

Wague appeared to have ended hopes of a Japanese comeback as he drilled Sabaly’s low cross into the goal to send Senegal’s supporters into raptures.

But the Asians were not done yet and hit back again through midfielder Honda, who collected Inui’s pass and prodded into an empty net after goalkeeper N’Diaye stepped off his line and failed to punch the ball away.

“It was a tough match, we knew it would be,” Japan coach Akira Nishino said. “I evaluate it as a very good point. Senegal is a tough team and this result I hope will lead to success in the next match.”