Djokovic takes positives from defeat ahead of Wimbledon 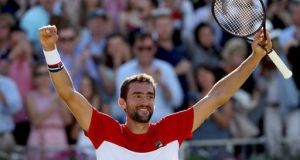 The 29-year-old Croatian, who last won at Queen’s in 2012, came from a set down to outlast Djokovic for his first title of the season in what was the longest final in the tournament’s history at two hours 56 minutes.

It was a particularly satisfying win for last year’s Wimbledon finalist who had also held match point in the 2017 Queen’s final before being edged out by Feliciano Lopez.

“It was a special win for me because last year I had a match point and didn’t convert it,” Cilic said at courtside. “It was a tough match – no breaks for me until the final set. Overall I had a great time here this week. I have waited six years to get my hands on this trophy. It is an amazing crowd, and I will come back every single year.”

Cilic controlled the early exchanges from the baseline, but missed six break point chances in the opening set, allowing Djokovic to battle back.

The 31-year-old took his chances with a couple of crisp forehands in the 12th game to break the Cilic serve and claim the first set after an hour-long battle.

A rampant Djokovic conceded just one point on his first serve during the second set and looked favourite to close out the contest in the ninth game, but Cilic responded with a booming serve out wide to save match point.

The Serb also looked in control at 4-1 up in the tie-break but Cilic fought back and a double fault at 4-4 allowed the Croat to take charge as he won six points in a row to force a decider.

With momentum back on his side, Cilic looked comfortable in the west London sunshine as he grabbed the only break in the final set to claim his first title of the year.

“It is great to see Novak coming back, and we all hope that he gets back to the top level again,” said Cilic afterwards.

Former world number one Djokovic, whose career has stalled since he won his 12th Grand Slam title at the 2016 French Open, has been battling for form and fitness this season. There were signs of him returning to his best at the French Open, but a first final in almost a year should give him confidence ahead of next month’s Wimbledon.

“I have to see the positive because I haven’t played a final in almost a year,” said Djokovic. “This came at the right time because Wimbledon is the most renowned and prestigious tournament in tennis.”

As for his chances of a fourth Wimbledon crown, Djokovic was circumspect. “I wouldn’t say I’m a contender for a trophy or anything like that.”

Connacht come out on top in nine-try clash with Edinburgh 22:51
Ronan Finn on why Shamrock Rovers are worthy champions 22:00
Jamie Vardy comes on to score winner at Arsenal 21:41
Limerick score 36 points to overpower Tony Kelly’s solo act 19:48
Rusty Ireland see ‘glass half full’ after overcoming Italy 19:33
Here is your handy guide to sport on television this week