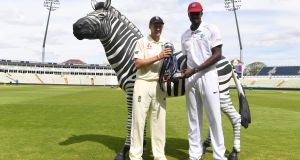 England captain Joe Root and West Indies captain Jason Holder with the series trophy ahead of the Test series between the sides at Edgbaston in Birmingham. Photograph: Paul Ellis/AFP

Joe Root called on his England players to think on their feet before Thursday’s maiden day-night Test against West Indies at Edgbaston, urging them to put aside any preconceived ideas about how the pink ball will play under floodlights and adapt accordingly.

The uncapped Mark Stoneman in place of Keaton Jennings at the top of the order is the one change from the XI that completed the 3-1 victory over South Africa last week and with the new set of tourists ranked eighth in the world, the target will be for a clean sweep in their last Test outing before the winter’s Ashes tour.

Playing this series opener in day-night conditions adds an element of jeopardy, however, and the buildup this week has seen plenty of theories regarding a pink Dukes ball that goes soft after the opening burst, the affect of twilight in the evening session on batting conditions and impact on body clocks and fatigue across a five-day game.

Stuart Broad has described it as a “step into the unknown” and Root, in keeping with his intention to be an instinctive leader upon taking over the captaincy at the start of the year, believes the best approach is “to keep an open mind” and play the situation as it unfolds.

“I am expecting it to be tough, as Test cricket always is,” said Root, who will break an England record if he passes 50 with the bat in an 11th successive Test match. “Obviously there are different challenges and it might throw up a different rhythm to the game. But I do think it is important not to look too far into it and have too many theories. We need to react to what is thrown in front of us and make sure that if things do start to happen that are different from normal, we respond to that quickly and win those sessions.”

Australia and New Zealand cricketers were offered a AU$1 million incentive to play the first day-night Test in Adelaide in 2015 but there is no additional financial bonus this week in what is the fifth match of its kind staged in world cricket and, for the first three days at least, will be sold out.

Root maintained the defence of the Ashes remains far from his thoughts – even if this match has been made a pink ball affair to give his players experience before the day-night Test in Adelaide this November – and will only consider the selection of Mason Crane, the uncapped leg-spinner, later in the series if conditions dictate. Chris Woakes, still slightly undercooked after a side injury, will similarly have to wait his turn.

Root said: “The Ashes is important, but every Test match we play is important and no one is treating this differently. No one is seeing the series as an experimental thing. We need to get off to a strong start and will do everything on and off the field to make sure of that.”

In keeping with this, Wednesday’s practice session was switched from optional to mandatory at Root’s insistence and the captain also tapped up his South African counterpart, Faf du Plessis, at the end of their recently concluded series for advice on day-night Tests after their experience in Australia last year.

Root pointed to Du Plessis declaring his side’s first innings after 76 overs to bowl at Australia’s openers with the new ball under lights as one such tip – a plan that did not reap an early breakthrough in what was a seven-wicket defeat – but also conceded conditions, and the ball itself, would be different in Birmingham.

Another step into the unknown will come for Stoneman on debut. The 30-year-old Surrey opener is the latest in a long list of partners for Alastair Cook and Root described it as “a huge opportunity” for an experienced county campaigner.

The England captain was respectful of their new opponents, mentioning the series in the Caribbean in 2015, where Jason Holder’s side won the last Test in Barbados to level the series, as a “clear indication of what they are capable of”.

The tourists, despite their lowly ranking and poor away record this century that has returned three Test wins against top eight opposition, are more attuned to pink-ball cricket, having played Pakistan under lights in Dubai last October and they come into this week after a drawn day-night warm-up in Derbyshire that saw four of their batsmen register centuries.

“We’re obviously huge underdogs,” said Holder, their 25-year-old captain, who added that his side would try make it uncomfortable for England’s senior players in the hope that this pressure transfers to newcomers such as Stoneman and the recently capped Tom Westley and Dawid Malan.

On what would constitute a successful series, he bluntly replied “a series win” before adding: “We expect a good contest. The English come pretty hard and we expect to go back just as hard at them.”