Ireland on a score of zero after first round, only to lose out in the second 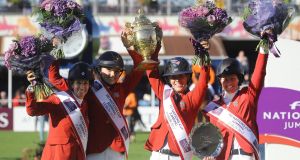 History was made on Friday at the Dublin Horse Show when the USA fielded an all-female team to win the Nations’ Cup for the Aga Khan trophy, a prize Ireland had in its grasp at the halfway stage only to lose hold of it in the second round.

The Irish team of Bertram Allen (Molly Malone V), Mark McAuley (Miebello), Denis Lynch (RMF Echo) and Cian O’Connor (Good Luck) were on a zero score after the first round, with the four faults of team newcomer McAuley being the discard score.

The USA were also on zero after round one and maintained their excellent form in round two as the Irish bid fell apart, O’Connor again jumping clear but picking up a single time fault, while the others had at least one fence down apiece to finish fifth.

France, who were on one fault after round one, finished second on five with the Netherlands placing third on seven faults.

Sponsored by the Underwriting Exchange and Devenish, the Irish team has secured qualification for the Nations’ Cup Final at the end of September.

“Unfortunately we dropped one of the balls here today. We couldn’t repeat our very good first round second time out, and the American team were very strong.

“Our eyes are now on the European Championships, which from the start of the season was always our number one goal.”

The highlight of Saturday’s jumping programme is the evening’s Land Rover Puissance, while on Sunday afternoon the Longines Grand Prix of Ireland takes centre stage.