Joanne O’Riordan: Will giants of doping fly too close to the sun?

Netflix documentary 'Icarus' an eye-opener on drugs in sport 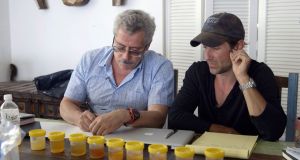 Grigory Rodchenkov and Brian Fogel in the Netflix documentary Icarus.

For anyone looking for a weekend docu-thriller, I would highly recommend Icarus, the critically acclaimed Netflix documentary that went on an insane journey through doping and state-sponsored doping in Russia.

Let me set the general scene. Officials from the International Olympic Committee, the World Anti-Doping Agency, the International Association of Athletics Federations, and people from accredited testing laboratories sit in shock and dismay as director Brian Fogel hands over a spreadsheet listing athletes from Russia who had been state sponsored to dope during the London 2012 Olympics. That was bad enough, but Fogel then said that this had been going on since 1968.

My first introduction to sport was following my sister and brothers in various athletics competitions. I was thrust high into the air at the tender age of six months when my sister would cross the line in first place. Running was a sport where it seemed pretty black and white, but with recent revelations there have never been more grey areas.

Cheat its way to gold

The revelations in the documentary were frightening. It portrayed how easy it was for a country to do what it wants and cheat its way to gold medals. As frustrating as that was to watch, all throughout I couldn’t help but repeatedly ask myself who was clean?

I tried to tell myself to stop being cynical and enjoy whatever happened, but as the now infamous doping doctor Grigory Rodchenkov kept saying: “Wada is like a religion, at some time everyone sins”.

After watching the World Athletics Championships in London, the cynic in me returned. While distracted by the Women’s Rugby World Cup, I couldn’t help but laugh when I got the notification of Justin Gatlin’s victory. My mother said to me “so you’re happy the cheat won”. My response was simple, many cheats have won many times, so why is Gatlin different? Sure, he was complacent and got caught but did he make the mistake many others have not?

This is not a full-on athletics diss, but I think in sports where winners are declared by time, it’s a lot clearer if there’s doping and more frustrating when the cheat wins. In a team sport, there are other players on the field that contribute and, as a result, win the game.

Anti-doping agencies will have their minor successes, but that’s all they will be: small victories. Technology is growing at a rapid rate, but quite frankly, it’s growing quicker for the dopers, not the regulators. As time goes on, there might be a scenario where every past record is wiped.

Richard Ings, former head of the Australian Anti-Doping Agency, said that the whole folly of blind trust is never going to work and in his time the only ones caught were complacent and arrogant.

As the cynic in me grows, I can’t help but feel awkward watching any sport. Any incredible feat will now be shrouded with doubt, and any record that’s smashed will raise eyebrows.

Icarus highlighted the real flaws with anti-doping testing. It took a freak chance friendship between Rodchenkov and Fogel to reveal all of this. It wasn’t some cunning operation by Wada, it wasn’t athletes speaking up, it was pure fluke.

Until more manpower, money and technology are invested, sport and doping will continue to go hand in hand. Investigative journalism and film-making cannot be relied upon solely to catch athletes out. Organisations have to be responsible and take action.

I found the Icarus title funny and ironic. Icarus was the Greek mythology character who disobeyed his dad and flew too close to the sun, thus melting his wings. If dopers continue to reach these heights, will we see a dramatic incident occur that finally opens everyone’s eyes? As American director, Annie Kaufman said, “What kind of man possesses that much hubris, that he dares it to fall?”

We all shall wait and see for the giant of doping to fly too high and come crashing down.