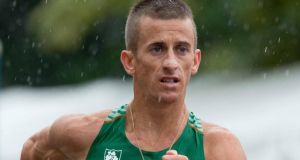 The last thing Rob Heffernan needs right now is any motivation to compete on the world stage. At age 39, he’s been here and done it all, although a quick glance at the start list for men’s 50km walk might just get his juices flowing again.

Set for Sunday morning (7.45am), the race follows the same 2km circuit at The Mall and in front of Buckingham Palace where five years ago, at the London Olympics, Heffernan finished fourth. Last year he was eventually upgraded to bronze, after the disqualification of Russia’s Sergei Kirdyapkifor a series of doping offences.

Only this time there are no Russians, their doping ban still widespread enforced, and nor is the reigning World and Olympic champion Matej Toth from Slovakia taking part, also absent due to an alleged doping offence.

2015 silver medallist Jared Tallent from Australia has also withdrawn injured. And while mercurial Frenchman Yohann Diniz is still there, plus the leading Chinese duo Niu Wenbin and Wu Qianlong, Heffernan can fancy his chances of shooting for another medal to go with the gold won in Moscow four years ago.

Heffernan certainly has the experience too, this being his seventh World Championships, his 2013 gold and Olympic bronze also completed by the European championship bronze won in 2012, that coming in the 20km walk.

Irish team manager Patsy McGonagle has also taken the precaution of accommodating the Irish walkers (Alex Wright also goes in the 20km walk) at a different hotel away from the Guoman Tower Hotel, adjacent to historic Tower Bridge, where the vomiting bug was rampant over the last few days.

And even at 39, Heffernan is far from the oldest athlete in London, that honour belonging fellow 50km walker Alejandro Francisco Florez from Switzerland, who will be 46 years and 94 days when he competes on Sunday.