Dressage and dresses graced the Dublin Horse Show at the RDS on Thursday the 9th August. Video: Bryan O'Brien 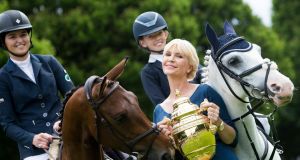 The annual RDS Dublin Horse Show kicked off on Wednesday so we’ve gathered all the information you need to know before attending this year’s equestrian festivities.

What is the Dublin Horse Show?

First held in 1864, the Dublin Horse Show is Ireland’s largest equestrian event. In its inaugural year there were 366 entries with a total prize fund of £520. In 1868 the show was held and organised by the Royal Dublin Society (RDS) on the lawns of Leinster House and in 1881 the show moved to “Ball’s Bridge,” a Greenfield site where the first viewing stand was erected.

More than 100,000 people are expected to attend this year’s show at the RDS with about 1,600 horses and ponies participating in the various equestrian events. There will be 134 competitions during the five-day event including 14 international show jumping competitions.

It’s turned into a lovely bright morning here in the RDS - enjoy the first day everyone. #DublinHorseShow pic.twitter.com/exdGw4TYwl

The Horse Show is officially branded this year as the Stena Line Dublin Horse Show.

What time and where is this year’s event taking place?

The 2018 Stena Line Dublin Horse Show is taking place in the RDS in Ballsbridge, Dublin 4 and runs from Wednesday, August 8th to Sunday, August 12th. Doors open to the public at 9am and the main hall entrance is also open from 9am each day. The public can enter the show grounds via the RDS concert hall entrance from 7am and equestrian exhibitors can enter the grounds via the Belvedere Gate from 7am.

What are the main events?

The Stena Line Dublin Horse Show opens on Wednesday with a number of riding events across the RDS while Thursday will see the Dundrum Town Centre Ladies’ Day take place with a €10,000 shopping voucher up for grabs for the overall winner. Described as “the highlight of the week”, the Longines FEI Jumping Nations Cup of Ireland, or the Nations Cup as it’s more commonly known, takes place on Friday. The Irish team for the cup includes Louth’s Mark McAuley with Utchan De Belheme; Mayo’s Cameron Hanley with Quirex; Limerick’s Paul O’Shea with Skara Glen’s Machu Picchu and Cork’s Billy Twomey with Kimba Flamenco. They will be competing against USA, Great Britain, Mexico, Switzerland, the Netherlands, France and Italy.

The Land Rover Puissance jumping competition will be held on Saturday and the Longines International Grand Prix of Ireland will be on Sunday.

There will also be live entertainment, food and shopping stalls and kids face painting and pony rides for visitors throughout the five days of the RDS show.

Will the traffic be bad and where should I park my car?

AA Roadwatch is advising motorists to avoid Merrion Road and Anglesea Road where the heaviest traffic are expected. Drivers have the option of parking their cars at Muckross Park College in Donnybrook or UCD and availing of the park and ride facility, which costs €10 per day including parking and shuttle bus for all car passengers. Shuttle buses run approximately every 15 minutes and start from 7am. The last bus leaves from outside the Intercontinental Hotel at 9pm and the UCD car park closes at 9.30pm. The park and ride shuttle service from UCD will be wheelchair accessible.

Alternatively, there’s pay parking on a number of roads around the RDS. Simmonscourt Road will be closed from 7am to about 7pm each day between Merrion Road and Anglesea road for the duration of the Horse Show, which runs from Wednesday, August 8th to Sunday, August 12th.