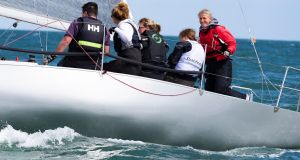 Laura Dillon at the helm of CriCri, skippered by Ali Clarke, at the Irish Sailing Pathfinder Women at the Helm 2019 regatta in Dún Laoghaire in August. Photograph: David Branigan/Oceansport

A global survey of 4,500 sailors released towards the end of last year makes for grim reading at a time when Irish women are to the fore in the sport like never before.

Although the World Sailing Trust document lists several positive indicators, almost 60 per cent of female respondents have experienced gender discrimination, but this worsens to 71 per cent for women in the 25- to 30-year-old bracket.

Incidences of harassment increased the older the respondent; however, over 2 per cent of under-18s described instances of harassment, increasing to 15 per cent in the 25-30 age group and plateauing at 20 per cent beyond that.

Based on the number of respondents, this is some 900 cases, according to the report.

Allegations of sexual assault were made by 43 respondents.

“I have been sexually harassed and assaulted by male bosses and crew mates in the sailing industry,” commented one 21-year-old woman in the report. Another said: “I dropped out of my high school sailing team due to a pervasive culture of sexual harassment targeted at me.”

The report was authored by Vicky Low and funded by the sailing philanthropist Andrew Pindar. A steering group was led by ocean racing skipper Dee Caffari and included Ireland’s Laura Dillon.

“Personally speaking, I don’t believe that the sport is discriminatory,” Dillon told The Irish Times. “The sport itself doesn’t need to change, just the mindset.”

Dillon cited her own positive experiences throughout her sailing career from junior to youth to adult, and is now an active skipper as well as a flag officer with the Royal Ocean Racing Club.

Although the report found some instances of deliberate discrimination, the male domination of participation can be regarded as self-perpetuating. Need crew to go sailing? Most available crew are male, therefore all- or mostly all-male crews turn out to go sailing and a cycle is formed.

I wasn’t a fan of gender quotas in the boardroom or in sailing, but I’ve changed over the last five years

“It’s actually incredibly inclusive when you look at how family-friendly it is and that men and women can actually sail together,” says Dillon. She refers to the last edition of the Volvo Ocean Race that included a gender quota initiative that resulted in 20 fully fledged ocean racing sailors, including Rio 2016 silver medallist Annalise Murphy.

That race led to Dillon changing her mind about gender quotas that have proven contentious in many areas of modern life.

“The general view is that it is very positive, which is now my own personal view. Historically, I wasn’t a fan of gender quotas in the boardroom or in sailing, but I’ve changed over the last five years.

“The real thing to be careful about is setting the quotas at a realistic level that maintains the quality of the individuals taking part. So not bluntly setting 50/50 female to male but if sufficient numbers of capable female sailors suggest a 30 per cent quota, then set it at that and build numbers from there.”

Much of the report is based on experiences at international and elite levels, but 1,200 sailing clubs were also included.

A draft addendum to the report will provide grassroots outlets with a toolkit to address gender balance and increase opportunities for women and girls. This suggests 10 different ideas and recommends trying a couple of ideas for an initial period and then adding more.

Irish Sailing’s Pathfinder Women at the Helm event was included as an example of an event requiring 50 per cent or more female crew. Other suggestions include mandating mixed crews, creating social events for knowledge transfer between female sailors, creating role models and mentors as well as media promotion of female sailors.