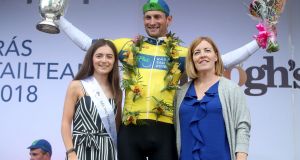 More than a year after An Post announced it was ending its backing of Irish cycling, the sport is still chasing new support to fill the gap created.

The Rás Tailteann and the women’s Rás na mBan both confirmed on Thursday that their searches for replacement title sponsors are ongoing. An Post has backed both for several years, creating a void when the company exited after the 2017 editions.

Rás Tailteann director Eimear Dignam said the organisation committee had set a deadline of the end of November. “If something is not secured by then, or if talks are not looking promising, then we will have to pull the plug on next year’s race,” she said.

The Dignam family have been involved in running the race for several decades and like many in Irish cycling, would be very reluctant to see the race stop, even for one year. However, the costs of running a UCI-ranked international are considerable, and so work will continue in the weeks ahead to try and secure a deal.

The Rás na mBan race is in a somewhat better position. Although the event is also searching for a title sponsor, committee member and public relations officer Declan Quigley said the comparatively smaller budget of being a non-UCI race plus support from various race partners takes the pressure off.

“Assuming that everybody comes back on board next year, we are confident that Rás na mBan will come back at the same level for 2019,” he said. “We have managed to develop the race to this point by being efficient and having lots of ancillary partners.

“That said, we are still searching for a long-term deal that would give us a secure footing for future editions and also mean that we can grow the race.”

The former An Post Chain Reaction team has been forced to wait at least another season before returning. Speaking last year, the general manager Kurt Bogaerts said the search for a new backer had run out of time but he was confident the team could return for 2019. However, that proved over-optimistic and the Belgian plus Sean Kelly are still searching for a replacement title sponsor.

An Post’s support of Irish cycling was of huge benefit given the boost to the Kelly team and various competitive and leisure events. While its departure has had a wide-reaching effect, Quigley pointed out that if a company wanted to maximise its exposure, the sport offered a huge opportunity.

“Irish cycling is a prime product for any prospective sponsor,” said the media professional and sport commentator. “There is a complete sport there that a sponsor would be able to support. Cycling Ireland has more than 25,000 members, and then you can multiply that by at least four for the amount of leisure riders out on the roads every weekend.

“The sport is blossoming and there is a prime product there ready to take on board.”