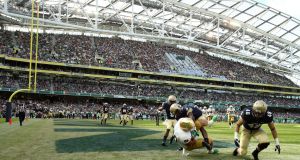 Notre Dame’s Tyler Eifert catches the ball for a touchdown during the 2012 clash against Navy at the Aviva Stadium. Photograph: Cathal Noonan/Inpho

American college football returns to Dublin from the 2020 season onwards, with Notre Dame scheduled to play Navy in the Aviva Stadium. The match between two of the oldest rivals in college football will be the first of five games to be played here, with Aer Lingus due to be the title sponsor. At a media unveiling in the stadium on Thursday morning, it was estimated that the games will be worth in the region of €250m to the local economy.

Navy and Notre Dame faced off against each other in Dublin six years ago, with Notre Dame getting their season off to a scintillating start with a 50-10 victory in the Aviva. That game featured future NFL players such as New Orleans Saints linebacker Manti Te’o and Cincinnati Bengals tight end Tyler Eifert. Back then, the game was packaged as part of The Gathering and the tourism benefits of the enterprise were again emphasised at the launch this morning.

“Ireland currently has 11 million overseas visitors a year,” said Minister of State for Tourism, Transport and Sport Brendan Griffin. “Two million of those are from North America. That number has doubled from one million in 2013. It’s fantastic to have these games in Dublin and it will continue to bring visitors to these shores.

“When college football came to Ireland in 1996, I caddied for some of the Navy entourage in Dooks golf club in Kerry. That shows that these games don’t just make an impact in Dublin, they make an impact further afield all around the country too. And while the Navy lads might not have been fantastic golfers, I can confirm that they were excellent tippers.”

The line-ups for the games in 2021 and thereafter will be announced at a later date. Navy and Notre Dame actually face off this weekend as it happens, clashing in San Diego. The two colleges have a long and storied history together, going back to the Navy’s support for Notre Dame during World War II that saved the South Bend, Indiana school from closing its doors due to the war.

Speaking at the unveiling, Taoiseach Leo Varadkar looked delighted with the sporting and tourism coup.

“College football is one of the greatest spectacles in world sport and to bring it back to Ireland for a five-game series is wonderful news for Irish tourism and for sports fans. Over 35,000 fans travelled to Ireland when Notre Dame and Navy last met in Dublin in 2012 and we will warmly welcome them and many others back for the Aer Lingus College Football Classics.

“Major games such as this one showcase Ireland as a location for international events and tournaments and put our world-leading hospitality and tourism sector front and centre. I look forward to the first game of the series with the return of Notre Dame vs Navy in August 2020; I have no doubt it will be a hugely popular occasion.”