Team Ingebrigtsen one of the many hurdles Ireland face in Norway 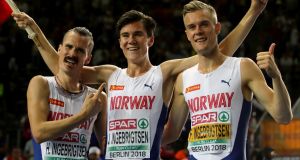 Henrik Jakob and Filip Ingebrigsten are expected to run for Norway on their home track at Sandnes in the European Athletics Team Championships. Photograph: Alexander Hassenstein/Getty Images

It may be a little unfair to bill it as Team Ireland versus Team Ingebrigtsen, only one at least partly stands in the way of the other in the quest to retain First League status in the European Athletics Team Championships. With advantage it seems resting with Team Ingebrigtsen.

The biennial event runs from Friday to Sunday in Sandnes, Norway, home to the three Ingebrigtsen brothers Henrik, Filip and Jakob, who with the help of the their father and coach Gert now dominate European distance running. They’re hotly fancied to win all three distance events on their home track – Jakob the 1,500m, Filip the 3,000m, and Henrik the 5,000m.

European Athletics have decided to streamline the championships again for 2021, with tiers being reduced from 12 to eight teams. As a result only one country competing in Sandnes will be promoted, with five teams coming down from the Super League, or top division, which runs concurrently in Bydgoszcz, Poland.

It also means Team Ireland – and indeed Team Ingebrigtsen – will need to produce something special across all 40 events, men and women, to retain that First League status, given eight countries will effectively be relegated, only the winners promoted and the next three countries surviving, to be joined by the five relegated countries from the Super League for 2021.

Ireland’s chances won’t be helped by the absence of Ciara Mageean, who decided not to fit Sandnes into her 1,500m racing schedule in the build-up to the World Athletics Championships in Doha at the end of September, with Leon Reid also a late withdrawal from the 100m.

Thomas Barr is back in action in the 400m hurdles, after missing out on the National Championships last month with a calf muscle strain, his chances helped by the fact Norway’s European record holder in the event, Karsten Warholm, has opted for the 400m flat, again with a view to maximising their chances of securing that single promotion spot. Barr will still have to contend with Turkey’s Yasmani Copello, who finished third and one place ahead of him at the 2016 Olympics.

Turkey, who missed out on promotion by 3.5 points in 2017, along with Belarus and the Netherlands, who were both relegated from the Super League two years ago, will likely lead the charge.

Other Irish athletes looking to secure podium points are Marcus Lawler in the 200m, Mark English in the 800m, Ciara Neville in the women’s 100m, Fionnuala McCormack in the 5,000m, and Sarah Lavin in the 100m hurdles. Rhasidat Adeleke is also part of the 4x100m relay team, the 17 year-old fresh from winning a sprint double at the European Youth Olympics in Baku, Azerbaijan last month.

Team Ingebrigtsen meanwhile are expected to secure maximum points in their races: the 18-year-old Jakob , the reigning European champion and European indoor silver medallist, clocking a European Under-20 record of 3:30.16 at the Diamond League meeting in Lausanne, more than five seconds faster than the best of his nearest challenger, Richard Douma of the Netherlands, who has run 3:35.77.