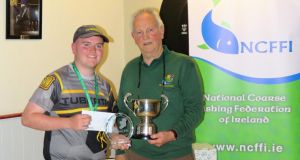 THIS year’s World Cup Trout Fly Championship will be remembered for all the wrong reasons in terms of contrasting weather conditions. The five-day event saw Cushlough Bay – on the shores of Lough Mask in Ballinrobe, Co Mayo – come alive with anglers from home and abroad competing for the coveted title of world cup trout champion.

Now in its 63rd year, the event has stood the test of time and is now considered the pinnacle of competitions on the Irish calendar. Some memorable moments included the giving of a Ford Prefect car as first prize way back in 1954 and the president of Ireland, Mary Robinson, getting proceedings under way in 1994.

As each year passes, the committee is getting closer to a full catch-and-release set-up; however, as things stand, two fish per angler in the four qualifying days can be brought in and subsequent fish recorded on score cards. Finals day still holds for four fish dispatched plus score card completion.

The competition itself comprises of four qualifying days and a final. This year, day one could be best described as a “misadventure”. Flat, calm conditions left no room for fly fishing. One competitor summed it up nicely: “From Saints Island to Tourmakeady and Devinish to College Bay, the lake resembled a total mirror. Not a breath of wind.”

The upshot saw a small amount of fish caught by more than 100 anglers, and a draw required for 16 places to fill the 25 per cent quota for each day. Two anglers actually caught two fish, with Ted Wherry winning the day. I would venture to say that, in its 63-year history, similar days are few and far between.

For the remaining qualifying days, conditions improved somewhat and confirmed what this splendid lake is capable of producing. Your correspondent also qualified for the final, with first-class guidance from fly-tyer and angler extraordinaire Laurence Gibb from Groomsport, Bangor, Co Down (trufly1@gmail.com).

On finals day last Monday, and in total contrast to the opening qualifier, finalists were greeted with gale force winds and, with a small craft warning in place, the committee had no other choice but to postpone the competition until Saturday August 17th.

The 2019 All-Ireland coarse fishing championships returned to Ballinamore in Co Leitrim last weekend, the town which hosted the first event more than 60 years ago. Here, 122 anglers from across the provinces competed for the coveted title, but it was 20-year-old international angler James O’Doherty who took the honours on Lough Scur with 9.980kg.

Enniskillen-based O’Doherty, said: “I decided to keep things simple for this one-day competition. The long pole was my main attack at 13m, building up the peg as the day went on. I managed to have a great last two hours to end up with around 200 fish.”

Junior anglers, including U-15 contenders Brian Clark and Harry Boothby, had the opportunity to fish alongside the adults on Brackley Lake. The event proved a fantastic experience for Staffordshire junior Boothby, who joined his dad on a fishing holiday. “It was a tough one to find that eels don’t count here in Ireland,” he said.

Paddy Connolly won the U-20 section at Kiltybarden with 1,550kg, and Donagh McSherry from Nenagh took runner-up position.

A full pay-out with five peg sections and top five followed the match at Terry Shortt’s Heritage Bar in Ballinamore, where Oliver McGauley, president of the National Coarse Fishing Federation of Ireland, presented the prizes and thanked the volunteers and Lakelands AC for their support.

It was devastating news to hear of the passing of Ciarán Burke, late of Mount Gable House, Clonbur, Co Galway. On my first visit to Burkes Bar and Restaurant, perhaps 10 years ago, I was warmly welcomed by Ciarán and his wife Cha (Charlotte), indeed by the entire family, who took me under their wing.

His household became a second home to me and I thought the world of Ciarán. I always enjoyed our late-night chats in the sittingroom. A favourite quote he had, was: “What time did you get in last night?” Answer: Twenty-past.

To his family, especially Cha, and children Adrienne, Tomás, Gearóid and Anna, and his extended family, I extend my deepest sympathy. May he Rest in Peace.

UCD student Almha McDonnell, from Ballinteer, Co Dublin, was top rod at the recent ILFA trial on Lough Corrib to select a team to represent Ireland at the Home International Championships in Scotland next year.

The 19-year-old joined the association in 2017 and has already achieved great success, with placings in the two recent internationals including runner-up at Draycote Water, Warwickshire, in June.

The next trial will be held on Loughanure Lake in Co Donegal on Sunday September 8th. Entries to Dr Pauline McClenaghan @ ilfa1@eircom.net.