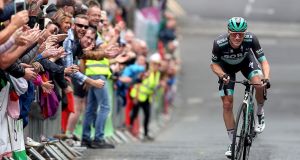 Sam Bennett winning the National Championships in June. He will ride the upcoming Vuelta a España. Photograph: Bryan Keane/Inpho

Irishwomen Kelly Murphy and Anna Turvey lodged strong performances on the second day of the 2019 European road championships in Alkmaar, the Netherlands, on Thursday, netting 10th and 12th respectively in the women’s time trial. National champion Murphy was one minute 27 seconds behind the Dutch winner Ellen Van Dijk, just 35 seconds off the bronze medal position. Turvey was a further 26 seconds back.

Michael O’Loughlin was best of the under-23 riders, netting 14th in that contest. The Irish U23 TT champ covered the 22.4km distance 52 seconds behind the winner Johan Price-Pejtersen (Denmark). Fellow Irishman Ben Healy was 23rd.

In the Elite event Eddie Dunbar was 19th, one minute 41 seconds adrift of the triumphant Belgian Remco Evenepol.

The championships continue Friday to Sunday with the road races. Maeve Gallagher and Lucy O’Donnell will contest the junior women’s event on Friday. On Saturday O’Loughlin, Healy, Daragh O’Mahony, Marc Heaney, Dillon Corkery and Conn McDunphy line out in the under-23 men’s race, while Alice Sharpe is the sole Irish entrant in the Elite women’s event.

Racing concludes on Sunday with the Elite men’s road race. Sam Bennett and Dunbar are the strongest riders in the Irish lineup, while Conor Dunne, Rory Townsend, Matthew Teggart and Robert Jon McCarthy will likely play a supporting role to them.

Bennett had a big gap in racing after winning the Elite national road race championships at the end of June, but returned to action last Sunday in the Prudential RideLondon-Surrey Classic. Despite his lack of recent competition he took an excellent second behind the winner Elia Viviani (Deceuninck-QuickStep). Indeed he might have won had his Bora-hansgrohe leadout train not been sidelined due to a crash close to the line.

Bennett is one of the fastest sprinters in professional cycling. He was controversially overlooked for the Giro d’Italia and also missed out on Tour de France selection, but will ride the upcoming Vuelta a España. That begins on August 24th, and if he is in full form Bennett should be in the running for multiple stage wins.

He is set to depart Bora-hansgrohe at the end of the season. The Carrick-on-Suir rider is tipped to move to Deceuninck-QuickStep, while Viviani is set to sign with the French Cofidis squad.