European amateur champion will fight out of New York and Boston 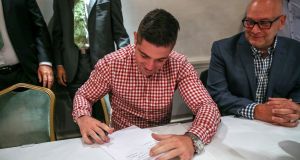 Joe Ward beside Lou DiBella of DiBella Entertainment as he signs his first professional contract in the Westbury Hotel in Dublin yesterday. Photograph: Gary Carr/Inpho

New York promoter Lou Dibella is in no two minds about Irish boxing captain Joe Ward deciding to turn professional, taking the leap just one year before the 2020 Olympic Games in Tokyo.

“Amateur boxing has (metaphorically) been the mafia. It is corrupt. Who is running amateur boxing right now? Look what happened to Conlan in the Olympics,” said DiBella before conceding that professional boxing may not be a whole lot better. But at least, he argues, Ward is not wasting another 18 months before throwing himself into his brave new world.

“It was a very difficult decision for me to make,” explained Ward. “A lot of people expected me to turn pro after London, after Rio. I’ve had an amateur career and I’m very grateful for the opportunities I’ve been given but I wanted to get the right team around me.

“There was no guarantee that I’d win an Olympic medal. I had the potential but things don’t always work out the way you want them to.”

At 25, the Tokyo Olympics are out because by the time Ward would have gotten to his first professional outing after Japan he would have been pushing 27 beginning in a new career. He has always been a run risk to the paid ranks despite the top grant of €40,000 per year State funding as an athlete regularly winning world and European medals. No other amateur male Irish boxer has been European champion three times.

His team expects that Ward will continue to box at the weight that has brought him so much success with Ireland, light heavyweight. But they are keeping an open mind regarding the future. His first opponent will be over six rounds with an announcement expected in the next few weeks as to who that will be. His fights will be taking place in New York and Boston. DiBella, like Katie Taylor’s promoter Eddie Hearn, is not currently thinking about staging a fight in Ireland.

“If you look at the Olympics, the scoring, who the people are who have run amateur boxing. There’s a long and storied history of unfairness. Joe’s first responsibility is to his family. He’s 25-years-old now. He’s not a kid,” said DiBella.

“Nothing [in Ireland] is on the schedule right now. The first few fights will be in the States.”

Ward will stay for extended periods in Long Island in the build up to his fights and afterwards come home to Moate in Westmeath, where his family are based. It will be a balancing act, although he has travelled extensively as an amateur.

Others have not made the successful transition to professional, many of them falling down on punching power after years in the amateur point-scoring version where a big punch is not a necessity for winning. It is in professional boxing.

Like Taylor, Ward is mild-mannered and with the sport dovetailing with the entertainment industry there is often an onus on fighters to sell their own fights. A lippy boxer can fill an auditorium as much as a successful slugger. Ward has never come across as a person who craves the microphone.

“I can go out and talk crap or be a quiet guy. I’ll be myself. That’s the way I’ll do it. I don’t think I have to change too much,” he says. “We’re fighters. We all have a bit of nastiness in us. If you piss me off you’ll go down in the fourth round.”

The ink barely dry on his first professional contract and already his learning curve is steep.