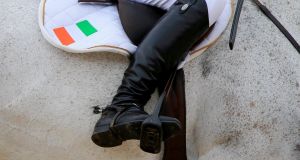 This weekend, Irish show jumping riders are competing in Germany, Belgium, The Netherlands, and in Uruguay. Photograph: Inpho

Antrim teenager Chris Megahey recorded the biggest success of his career at the Olympia Christmas show in London on Thursday night when sharing the spoils in the Porsche Cayenne Puissance with Britain’s Holly Smith.

Nine riders took part in the competition but the winners were the only pair to advance to the final fifth round where the wall stood at 2.15m. Both Megahey (18) and Smith were mounted on Irish-bred horses, the former on his father Britt’s Seapatrick Cruise Cavalier while Smith partnered her own eight-year-old OBOS Quality 004 gelding Quality Old Joker which was bred in Co Kilkenny by Roberta Dowley out of the Slyguff Joker VII mare Little Joker.

Afterwards, Megahey spoke about the lead-up to the competition and how Seapatrick Cruise Cavalier’s Puissance career started by chance when they were trying to sell him.

“During the day leading up to the class I was a bit shaky, a little nervous - I enjoyed the atmosphere and the crowd really gets behind you and pushes you on. We originally bought the horse for eventing but he wasn’t quite good enough. I took him on when I was 15 and started jumping him.”

Asked when did he discover that ‘Socks’ could jump “very big” Megahey replied, “It was actually when we were trying to sell him. He wasn’t going that well and a good friend of mine, Daniel Coyle, suggested I jump him in a Puissance that day and he has just gone on from there. I’m really happy tonight. I loved it - it didn’t faze me at all. It’s just brilliant being here, being around top riders like Marcus Ehning and Scott Brash,” he concluded.

Megahey and Seapatrick Cruise Cavalier, which was bred in Co Carlow by Noel Walsh out of Cavalier Countess (by Cavalier Royale), have made a name for themselves as Puissance specialists in the past two years. They won the Emerald International Puissance in 2014 and finished as runners-up in the Horse Of The Year Show Puissance this October. Seapatrick Cruise Cavalier won the Land Rover Puissance at the Dublin Horse Show last year when ridden by Egyptian rider Sameh El Dahan as Megahey was too young for the senior international classes.

This weekend, Irish show jumping riders are also competing at the German three-star show in Frankfurt, at Lier in Belgium and at Roosendaal in The Netherlands while Louth’s Tom MacGuinness is in Uruguay for a two-star endurance competition.

4 Chelsea win at Liverpool to move into top four