Hylands is top of the world 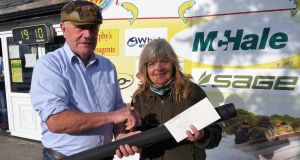 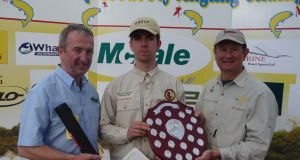 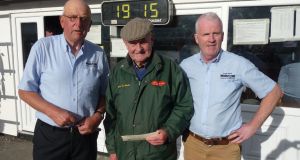 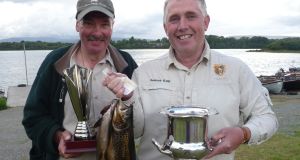 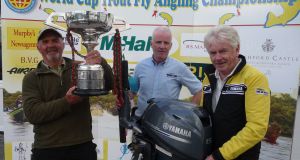 Ireland has a new world-cup trout champion. Geoffrey Hylands from Banbridge, Co Down, took the crown after five days of competitive angling at the fly angling championships on Lough Mask, near Ballinrobe in Co Mayo.

Now in its 61st year, the event is widely regarded as the premier competition in the world. This year, 468 anglers competed, including those from Canada, US, Scotland and the four corners of Ireland.

Speaking to the large gathering at Cushlough Bay, chairman Billy Burke welcomed all competitors to Ballinrobe, to the boatmen for their contribution, to the many sponsors for their support and to the hard-working committee without whom the event could not take place.

Master of ceremonies Denis Kelleher, on behalf of the world committee, presented John Paddy Burke of Burke’s Boats and “Anglers’ Fancy” fame, with a token of appreciation for his 40 years of sponsoring boats for the championships.

Of course, JP’s involvement goes back the full 61 years when, along with his father and brothers, they acted as boatmen. “There were no engines at that time, just oars. For the first few years, the event attracted about 150 anglers and it was said: ‘This competition won’t last long.’ How wrong they were,” he said.

This was followed by a minute’s silence for those who had passed away during the past year.

Fishing over the five days could best be described as extremely difficult with a fish of about a pound (0.45kg) sufficient to qualify for finals day.

Although the weather was perfect, the daphnia feeders in the deep failed to materialise to any great extent. Instead, the bigger fish, although scarce, were to be found in the shallows.

With four fish, Hylands brought into play the rule whereby only three fish are allowed to be despatched. Fourth and subsequent fish must be measured and verified by boatman and fishing partner, and returned alive.

An estimate of the weight is taken against the length and is joined with the weight of the three weighed fish. For the record, only four anglers caught four fish over the five days!

“I’ve fished the world cup for 20 years and my best position was 15th. I’m absolutely delighted with the win today. All my fish were caught at the river outlet close to Shaw’s Bay. I would like to thank my boatman Laurence Gibb and friend Joe Curran who tied the winning flies, a Claret Dabbler and Green Hopper,” he said.

Cloghans angler Seamus Kelly also enjoyed his world cup. Having qualified on Thursday, he went on to catch two fish on finals day, one of which was the heaviest over the five days, a beauty of 1.5kg (3.314lb). Together, his catch placed him in second position overall.

The championships are the main event on the trout angling calendar and very important to the Ballinrobe area, bringing in hundreds of anglers and friends each year. Congratulations to chairman Billy Burke and his committee for organising these magnificent championships. Roll on next year!

Applications are now invited for funding for projects such as fisheries habitat enhancement and sustainable development works to marketing and promotional projects for angling.

Regional information workshops will be held to give participants a better understanding of the various funding streams and how they can apply via an online system.

Those interested in attending are asked to RSVP to funding@fisheriesireland.ie, to find out locations and their preferred choice along with their name and contact details. Closing date for applications is Friday, October 13th.

IFI chief executive Dr Ciaran Byrne, said: “While the National Strategy for Angling Development funding stream focuses on improving angling access, the Salmon Conservation Fund and Midland Fisheries Fund re-invest the contributions of anglers into valuable initiatives with a view to promoting the recovery of salmon stocks and habitats and supporting sustainable development works in the Midlands respectively.”