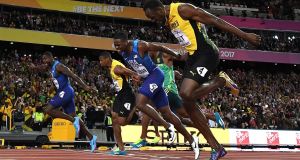 Not since the Royal Albert Hall booed Bob Dylan for going electric has the London crowd sounded so mixed up in their confusion. History best judges these moments anyway and for Justin Gatlin maybe the jury should still be out on this one.

Because everything about Gatlin’s shock victory over Usain Bolt inside the Olympic Stadium on Saturday night was read out like a death sentence to the sport, and given Gatlin’s two doping bans in the past – plus his age-defying 35-year leg speed – perhaps deservedly so.

Sunday evening’s 100m medal ceremony was also moved to the start of the event programme to spare the American a similar cacophony of booing, although did nothing to quiet the air of scepticism. Why – and how – was Gatlin still running on this stage, for all the so-called cleansing within the sport?

Only what wasn’t so quickly judged was why the fastest man who has ever run this earth suddenly found himself run into third place. It was Bolt’s first loss in a major championship in nine years, his 9.95 seconds the slowest of his championship times, and even if a few weeks shy of 31, marks a sudden decline for the once unbeatable Jamaican.

If anything Gatlin, who won in 9.92, didn’t ruin Bolt’s farewell party; Bolt was more like a no-show. And somewhere against the backdrop of the hero-villain, the showdown between the truth and the lies, all of that appeared to be lost on the London crowd – and maybe some other things too.

These points were put before Gatlin and Bolt afterwards, both men sitting calmly at the press conference along with the 21-year old American Christian Coleman, who had won silver in 9.94. Bolt had, remember, only won this title the last time by .01 ahead of Gatlin, in 2015, and his reaction time here (.183) was his slowest ever in a global final.

Although it never turned into a finger-pointing exercise, perhaps for fear they might soon be pointing at themselves.

“For me, over the years, I’ve always said listen, ‘he’s done his time’”, Bolt said of Gatlin. “And if he’s here, that means it’s okay. I’ve always respected him as a competitor, over the years. He’s worked hard, I’ve always said that. He’s one of the best competitors I’ve competed with. I know that if I don’t show up he’s always going to win, and tonight he showed up, was the better man, executed well, so for me he deserved to be here.”

Gatlin then returned the compliment to Bolt: “I can understand the rivalry. But it’s not a bitter rivalry. I respect the man utmost, and every time we come across the finish line I’ve shaken his hand, given him a hug, and told him congratulations. And that’s really all that matters to me.

“It’s kind of sad that my boos were a little louder than most peoples’ cheers. But I want to keep it classy. At the end of the race, I bent a knee for Usain, paid homage to him. And this night is still a magical night for track and field, for Usain Bolt.”

Gatlin last won this title in Helsinki back in 2005, and kept it too despite failing a second doping test a year later, then banned from 2006-2010. His first case is still considered minor, when in 2001, aged 19, he tested positive for amphetamine, attributed to a prescription medication Adderall that Gatlin had been taking since he was nine, and he served a provisional suspension of just under a year.

So Gatlin may not be dirtiest athlete in the sport, although has certainly found himself painted that way. Some 31 athletes are also competing in London having previously served doping bans; not one other has been subjected to booing.

“But here’s my question to you: what do I do that makes me the bad boy? Do I talk bad about anybody? Do I give bad gestures? I don’t. I shake every athlete’s hand. I congratulate them. I tell them good luck. That don’t sound like the trait of a bad boy to me. It just seems to me the media want to sensationalise, and make me the bad boy, because Usain is a hero. And that’s fine. I know you’ve got to have a black cat and a white cat, but guys, come on.”

Bolt’s response to the question of Gatlin’s winning time being the slowest since 2003, and that 100m times across the board this season were slower, was also telling.

“There’s something called injury, and sometimes everything don’t go as smoothly as you want to, there’s negative wind. There’s so much different things. So to just directly say something or state something to all three of us like that I take that disrespectfully, you know what I mean?”

And with that the hero and the villain seemed one and the same.