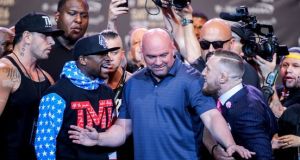 A month ago, Floyd Mayweather was polite enough to offer Conor McGregor a choice for their fight on August 26th in Las Vegas.

In an interview with ESPN on Tuesday, the former boxing world champion conceded that his opponent, a UFC fighter with no professional boxing experience, has a chance.

“I’m not the same fighter I was two years ago. I’m not the same fighter I was five years ago. I lost a step,” said the 40-year-old Mayweather. “A fighter like Andre Berto isn’t even supposed to go the distance with Floyd Mayweather, but remember, I was 38. It’s obvious I’m slipping a little bit to even let a fighter like that go the distance with me.”

Few believe that McGregor can beat one of the greatest boxers of all time, and there have been reports that tickets sales for the fight have been slow. So perhaps it was with half an eye on his bank account that Mayweather said he believes his opponent has the edge on paper.

“He’s a lot younger. When you look at myself and Conor McGregor on paper, he’s taller [McGregor is an inch taller], has a longer reach, he’s a bigger man from top to bottom. He’s a lot younger, so youth is on his side,” Mayweather said of his 29-year-old opponent. “And I’ve been off a couple of years. And I’m in my 40s. So, if you look at everything on paper, it leans toward Conor McGregor.”

McGregor is known for his aggression as an MMA fighter – he once knocked out Jose Aldo in 13 seconds – and Mayweather conceded his own days as a heavy puncher have gone. “I used to have a 90% knockout ratio,” Mayweather said. “It’s obvious I slipped somewhere. Something has taken a toll on my career.”

It’s conceivable that McGregor, fighting against possibly the greatest defensive boxer of all time, could fail to land any significant blows on the American when they meet in Las Vegas. But Mayweather, whose superfight against Manny Pacquiao in 2015 often resembled two men trying not to hit each other, says he will go after McGregor.

“This can’t be a defensive fight. I have to go to him,” Mayweather said of McGregor. “I owe the public because of the Pacquiao fight. They weren’t pleased with that. They’re gonna be pleased with this fight here.

Mayweather is currently 1-5 to beat McGregor with bookmakers, with the Irishman listed at 4-1.