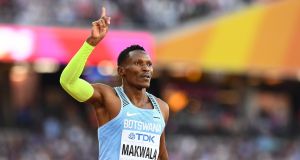 The IAAF has defended its decision to exclude Botswana medal hope Isaac Makwala from Tuesday night’s 400 metres final on medical grounds following a bout of norovirus.

Makwala insisted he was “ready to race” in an interview with the BBC on Tuesday but was later excluded by world athletics’ governing body from the final on medical grounds.

The 30-year-old had been expected to challenge favourite and Olympic champion Wayde van Niekerk of South Africa over one lap. Van Niekerk won gold on Tuesday night.

Video footage showed Makwala was prevented from entering the warm-up track and Botswanan officials criticised the IAAF for their heavy-handedness.

The IAAF said in a statement: “The IAAF is very sorry that the hard work and talent of Isaac Makwala won’t be on display tonight but we have to think of the welfare of all athletes.

“The athlete was diagnosed with an infectious disease on Monday.

“As per UK health regulations, it was requested that he be quarantined in his room for 48 hours, a period which ends at 14:00hrs tomorrow (August 9).

“These procedures are recommended by Public Health England and were clearly explained to the teams in writing on Sunday (August 6) and in person to the Botswanan delegation, a member of which was present with many other representatives of teams at a meeting that took place at the Guoman Tower Hotel on Sunday.”

Botswana team officials dispute the IAAF’s version of events and criticised the communication from the world governing body.