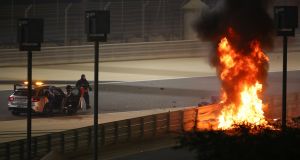 Romain Grosjean is to be discharged from hospital on Tuesday having escaped from a life-threatening accident at the Bahrain Grand Prix. The Haas driver has been thoroughly examined but sustained only burns to his hands after the car burst into flames.

In order to ensure he recovers properly, however, Grosjean will be replaced at the Sakhir Grand Prix in Bahrain next weekend by their test and reserve driver Pietro Fittipaldi, grandson of Brazil’s double world champion Emerson Fittipaldi.

Grosjean’s crash on the opening lap of Sunday’s Bahrain Grand Prix came when he clipped a wheel of Daniil Kvyat’s car and veered off into the trackside armco barriers at 137mph. The impact was measured at 53G and caused his car to split in half. The front part, including the Frenchman in the cockpit, speared through the barriers and was engulfed in a fireball. Grosjean was in the car amid the flames for almost 20 seconds before extricating himself and climbing to safety.

“After it was decided that the best thing for Romain was to skip at least one race, the choice to put Pietro in the car was pretty easy,” said the team principal, Guenther Steiner.

“Pietro will drive the VF-20 and he’s familiar with us having been around the team. It’s the right thing to do and it’s obviously a good opportunity for him. He’s been patient and was always prepared for this opportunity – and now it has come. That’s why we want him in the car and I’m sure he’ll do a good job.”

The Brazilian tested Haas cars in 2018 and 2019 but this will be his first competitive outing in Formula One. Haas have dropped Grosjean for the 2021 season but have yet to announce his replacement, with Michael Schumacher’s son Mick expected to be given a drive.

F1 has also responded to Daniel Ricciardo’s criticism of the way the accident was repeatedly broadcast after Grosjean was confirmed to be safe. The Australian driver described it as “like something from Hollywood”.

An F1 spokesperson has insisted they followed well-established protocols, however.

“At F1 this isn’t about entertainment and a few procedures and protocols are in place before any decision to run a reply is made,” he said.

“The context of what a viewer sees and hears with the commentary is important, with them talking about the safety of Romain, the halo, FIA safety improvements, and updates from the medical centre. There is constant dialogue between F1, FIA, race control, and sound judgment on viewers, families and those affected.”

Grosjean’s escape was welcomed as a testament to F1’s pursuit of safety, especially the mandatory employment of the halo cockpit protection device which almost certainly saved the Frenchman’s life when his car smashed through the metal barriers. However, the incident has still raised serious issues.

The barriers are designed to absorb energy from the impact in the process of deflecting a car back on to the run-off area. That Grosjean’s went through was a major concern, as was the subsequent fire, a danger believed to have been largely eliminated from F1 cars. The last time one caught fire in a crash was at Imola in 1989.

The FIA is to launch an investigation and the race director, Michael Masi, insisted it will be comprehensive and include every party involved.

“With every incident, but more so with every major incident, the FIA safety department leads the investigation,” he said. “The single-seater department, of which F1 is a part from a technical perspective, has an involvement. The F1 teams and the technical directors will be involved. The circuits commission will be involved on circuit safety.

“All of the various parts of the FIA group as a whole and all the respective subject matter experts really will review this particular area and see what can be learnt, what can be improved.” - Guardian