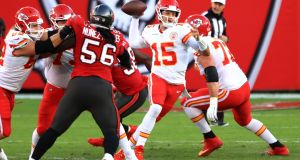 The Chiefs (10-1) won their sixth straight game and continued to track the front-running Pittsburgh Steelers for the top seed in the AFC playoffs by capitalising on the rhythm established between Mahomes and speedster Tyreek Hill, who caught 13 passes for 269 yards and three touchdowns.

Fittingly, he also snagged a game-clinching eight-yard pass on the boundary for a first down that enabled Kansas City to run out the fourth-quarter clock.

Hill had seven receptions for 203 yards in the first quarter, including scores of 75 and 44 yards. His first-quarter yardage was the most in a period since 2006 when Lee Evans generated 205 yards for Buffalo. Hill also grabbed a 20-yard TD in the third quarter to make it 27-10.

The Bucs (7-5) could not offer enough answers behind Brady, who finished 27-of-41 passing for 345 yards with three touchdowns and two interceptions.

Derrick Henry ran for 178 yards and three touchdowns to help visiting Tennessee grab sole possession of first place in the AFC South with a victory against Indianapolis.

AJ Brown had a 69-yard touchdown reception and also returned an onside kick 42 yards for a score late in the game for the Titans (8-3), who built a 35-14 half-time lead.

Jacoby Brissett had two short TD runs for the Colts (7-4), who had beaten division rival Tennessee in Nashville on November 12th.

Ryan Fitzpatrick, returning to the starting line-up due to Tua Tagovailoa’s injury, passed for 257 yards and two touchdowns to lead visiting Miami over winless New York.

Dolphins receiver DeVante Parker had eight catches for a season-high 119 yards, but Miami (7-4) won with defence after forcing six punts, notching a fourth-down stop and collecting interceptions by Nik Needham and Xavien Howard. Miami have forced a turnover in 17 straight games, tying a franchise record. Howard’s pick gives him an NFL-leading seven this year.

New York fell to 0-11. The Jets are five losses away from joining the 2008 Lions and 2017 Browns as NFL 0-16 teams. Quarterback Sam Darnold, who hadn’t played since November 1st due to an injured non-throwing shoulder, was sacked three times and was intercepted twice, passing for 197 yards.

Aaron Rodgers carved up Chicago’s usually formidable defence for four touchdown passes as host Green Bay put a chokehold on the NFC North with a blowout win at Lambeau Field.

Rodgers completed 21 of 29 passes for 211 yards as Green Bay (8-3) took a three-game lead over Chicago (5-6) and Minnesota with five games left. The Packers could clinch the division title as soon as next week if they win and both teams chasing them lose.

Bears quarterback Mitchell Trubisky, starting his first game since September 27th, hit on 26 of 46 passes for 242 yards and three touchdowns. He also tossed two interceptions and lost a fumble that Preston Smith took 14 yards for a score that upped Green Bay’s second-quarter lead to 27-3.

Buffalo scored a touchdown on the opening possession of each half and remained alone in first place atop the AFC East by holding off Los Angeles in a victory at Orchard Park, NY.

Bills quarterback Josh Allen threw for 157 yards and one touchdown and ran for another score as the Bills improved to 8-3 in the chase for their first division title since 1995.

Devin Singletary rushed for 82 yards for the Bills. Chargers rookie quarterback Justin Herbert was 31-of-52 passing for 316 yards and one touchdown, but Los Angeles (3-8) lost for the fourth time in its last five games.

Robbie Gould kicked a 42-yard field goal as time expired to give San Francisco a victory and a season-series sweep over host Los Angeles.

Nick Mullens passed for 252 yards with one interception to lead the 49ers (5-6), who benefited from the return from long absences by Deebo Samuel, who caught 11 passes for 133 yards, Raheem Mostert, who rushed for 43 yards and a score, and Richard Sherman, who intercepted a pass.

Jared Goff threw for 198 yards but suffered a pair of interceptions for the Rams (7-4) in a game that featured seven turnovers and two defensive scores.

The Patriots (5-6), who overcame an early 10-0 deficit, drove for Folk’s field goal after Arizona kicker Zane Gonzalez missed a 45-yard attempt with 1.47 remaining. New England quarterback Cam Newton completed 9 of 18 passes for only 84 yards and no touchdowns.

Arizona (6-5) tied the game at 17 with 8.02 remaining. Four plays after converting a fourth-and-4 attempt via a defensive holding penalty, Kenyon Drake scored on a one-yard run, the Cardinals’ first touchdown since their first possession of the game.

Ryan completed 22-of-39 passes and was intercepted once, but he became the eighth quarterback in NFL history to pass for 3,000 or more yards in 11 consecutive seasons. Ito Smith rushed 65 yards and a touchdown for the Falcons (4-7).

Kirk Cousins threw a 10-yard touchdown pass to Chad Beebe with 46 seconds left and Minnesota rallied for the victory against visiting Carolina in Minneapolis.

Chinn scored two touchdowns on fumble returns in an historic eight-second span early in the third quarter. There’s no other documented situation in NFL history in which the same defensive player scored touchdowns on back-to-back snaps.

Taysom Hill and Latavius Murray each ran for two touchdowns and visiting New Orleans took advantage of the absence of all Denver quarterbacks.

Hill won his second straight start in the absence of injured Drew Brees as the NFC-leading Saints improved to 9-2 with their eighth consecutive victory.

The Broncos (4-7) played without all four quarterbacks on their roster due to Covid-19 concerns. Practice squad wide receiver Kendall Hinton, who played quarterback as a freshman at Wake Forest, was expected to start, but running back Phillip Lindsay took the first three snaps in the shotgun formation and ran the ball.

The Giants (4-7) won their third straight game but also lost quarterback Daniel Jones to a hamstring injury in the third quarter. The Giants are tied with the Washington Football Team atop the NFC East, but hold the head-to-head tiebreaker.

Gallman scored his sixth rushing touchdown since Week 7 on New York’s first series when he plunged in from 1 yard out. The first touchdown for Cincinnati (2-8-1) came on Brandon Wilson’s 103-yard kickoff return in the first quarter, the longest play in team history.

Nick Chubb rushed for a season-high 144 yards and a touchdown, and Baker Mayfield threw two touchdown passes as visiting Cleveland posted its third straight win by holding off Jacksonville.

It was the third straight 100-yard rushing game, and fifth of the season, for Chubb. Mayfield hit 19 of 29 passes for 258 yards, and Jarvis Landry posted season-highs with eight catches for 143 yards and his first touchdown of the season for the Browns (8-3).