For women, going out for a run brings on a spectrum of feelings, from discomfort to fear 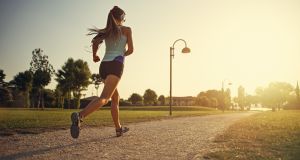 Out on the roads, I saw plenty of men out running and not one woman. It was the most jarring case of Red Car Syndrome you could imagine. Photograph: Getty

I hadn’t heard of Red Car Syndrome until a couple of weeks ago, and then I came across it twice in two days. It is so called because apparently there are people who think they will stand out if they buy a red car because they see so few of them on the road, only to buy one and then start seeing them everywhere. It’s basically that thing that happens when you suddenly become aware of something you didn’t know about before and now you can’t not see it.

The prompt was a Twitter thread started by an English writer and lecturer called Dr Rachel Hewitt. “Right, I’ve been doing some reading (and writing) about young women’s experiences in public space,” she began, “and it’s made me so angry and upset that I have to share a digest with you all.” From there, she went on to detail the findings of studies from around the world that laid bare the barriers to women of all ages being able to exercise in confidence and peace.

Not to put too fine a point on it, the main barrier is men. Being among men in open spaces generates what can kindly be termed a spectrum of unwanted feelings among women exercising, from mild discomfort to outright fear. It comes in a multitude of ways, some glaringly obvious, some not entirely so. Some that most of us – most of us men at any rate – wouldn’t ever think of as being an issue.

The three young lads in your local park hanging out on their bikes would appear, to the vast majority of us, to be not a particularly big deal. Plenty of us, indeed, have been those young lads on those bikes. But study after study in country after country has shown that teenage girls are reluctant to go running in parks because of young lads hanging out, on their bikes or off them.

Some of it is rooted in bad experience, the catcalling and mindless braying that gangs of teenage boys have been known to do since time began. But some of it is simple self-consciousness on the part of the girls – the three lads on their bikes could be award-winning boy scouts for all anyone knows but, to a solitary teenage girl running in a park, they are not to be trusted.

According to Dr Hewitt, Australian teenage girls describe parks as the least safe public space. In South Africa, 58 per cent of girls find public exercising spaces either unsafe or very unsafe. Sixty per cent of teenage girls in Stockholm wouldn’t run in their own neighbourhood. And so on and on and on.

Right, I’ve been doing some reading (and writing) about young women’s experiences in public space, and it’s made me so angry and upset that I have to share a digest with you all.

“But mostly,” she wrote, “girls fear violence and sexual crimes from boys and men. And, across all the studies I’ve read, the teenage girls who were interviewed had direct experience, or had been witnesses to, harassment, stalking, intimidation and assaults from boys and men.

“Teenage girls have coping mechanisms for these constraints on their access to public space. Some report trying to behave assertively, to not show fear. In parks, girls are reluctant to engage in exercise and prefer to ‘walk, sit or lay down’ in innocuous places, such as under trees.”

Like the vast majority of men, it would never, ever occur to me not to go for a run because it didn’t feel safe

There followed days of testimonies and anecdotes, the lived experiences of women and girls and what they come up against in the simple act of trying to exercise. The respondents to the thread came from far and wide across the globe, women of all ages and shapes, from all sports and none. Hundreds upon hundreds of them.

Reading it would turn your stomach. Women who had been attacked was the worst of it, clearly. But a lot of it was smaller, greyer and just as depressing. Women who had felt men in vans slow down and drive behind them; women who had male runners catch up to them and then pointedly run alongside them; women who had taken to running with their headphones in but no music playing so as to be able to both ignore and stay aware of the “oi, love” brigade.

Women who had stopped running because men had held their phones up as they passed, taking photos. Women who had given up running in their 20s because of beeping horns and building site whistles and hadn’t taken it up again until their 40s. Women who won’t let their daughters go and run in the park, day or night.

Reading through it all, I felt ashamed to realise that all of it – all of it – was a surprise to me. I was casually and contentedly oblivious to that side of life. I have been a runner, on and (mostly) off, for about 15 years and any reluctance I’ve ever had to get out and sweat has been down entirely my own lardass ways. Like the vast majority of men, it would never, ever occur to me not to go for a run because it didn’t feel safe.

As it happened, a day or two after reading the thread, I laced up the trainers and went out for a plod. It was late in the afternoon and dusk had fallen. Out on the roads, I saw plenty of men out running and not one woman. It was the most jarring case of Red Car Syndrome you could imagine. Now, every time I go out in the evenings, I can’t not see that there are virtually no women pounding the footpaths.

Fixing something as rooted in society as this is no easy task, clearly. But the first step is surely to talk about it. Any woman reading this and rolling her eyes that an oblivious man finally realises there is a problem is perfectly entitled to do so.

Any man reading it and rolling his eyes at yet more feminist whining is ultimately part of the problem.