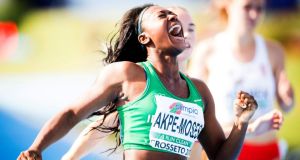 Gina Akpe-Moses celebrates as she crosses the line to take 100-metre gold in the Under-20 European championships in Italy. Photograph: Sportsfile

From Lagos to Athlone, Dundalk to Birmingham, and now to the top of a European sprint medal podium, Gina Akpe-Moses has already come a long way.

She’s now the best women’s under-20 sprinter in Europe, still only aged 18.

In other ways her journey as an Irish sprinter is only getting going - and it is a journey she intends on fast-tracking to the 2020 Tokyo Olympics, which are now exactly three years away.

What her 100-metres gold medal at the European under-20 championships in Grosseto, Italy last Friday also represents is the new generation of Irish sprinter - and in more ways than one.

And no one is more aware of that than Nigerian-born and Irish-raised Akpe-Moses.

“I’d like to think that, to be honest,” says Akpe-Moses, back at her family home in Birmingham this week after her gold medal run in Grosseto, where she also helped the Irish 4x100m relay team to a close fourth.

“I know if you look at the younger generation, like at the European Youth Olympics right now, and there is this whole new generation of Irish sprinters, and I think we will get even more medals over the next few years.”

Though born in Lagos, her family moved to Ireland when she was aged two and a half, then three years ago, they moved again to Birmingham. Yet she considers Ireland the home closest to her heart, with her background - and roots - in Irish athletics more than enough to answer anyone who might question either her loyalty to Irish athletics, or how Athletics Ireland has helped nurture her athletic development.

Nigeria has always had a proud tradition in sprinting, and when Akpe-Moses moved to Ireland she discovered her love and talent for it. Her father, Sunday, and mother, Tina, came here with the family to better their work and education prospects, and it was her older sister, Joi, who first got her involved in athletics.

“We moved to Athlone, when I was about two and half, not yet three. We lived there three or four years, then moved to Dundalk. I was always running in school, always loved it, every sports day.

“Buy my older sister, Joi, she started it really, and got me involved, because everything she did I would copy her, really. Anything she was doing I wanted to do it. (She has another older sister, Jennifer, a younger sister Precious, and younger brother, Godson).

“That was with the St Gerard’s club, then later I moved to Blackrock AC, also in Dundalk. After that Fintan Reilly got me involved with John Shields (Athletics Irelands sprints coach) and things improved again from there.”

However, not long after starting to work with Sheilds, the family moved to Birmingham, and with that she felt like the journey was starting all over again: “Oh yeah. I was really nervous, and really scared about whether I would be able to continue, how I would progress, and get better. I was afraid I mightn’t be able to compete anymore, but lucky for me it went the right way.

“I still race with the Blackrock AC, in Dundalk, that’s my Irish club. But I train with Birchfield Harriers in Birmingham, and I was very lucky that they’re one of the best clubs in the UK, in the city where I am based, and my coach there now, Andy Paul, he’s been great, to include me in the group, and they’re very strong. We’ve a great bond and a great understanding.”

Having gained Irish nationality at age eight, Akpe-Moses never had any doubt which country she would run for: she made her international debut for Ireland in 2015, aged 15, and the Schools’ International also ran in the 2015 European Under-20s, also winning silver that year over 200m at the European Youth Olympics. Last year she won silver at the inaugural European Youths (beaten by the German Keshia Kwadwo, who she beat for gold last Friday), and already clear on her and her coach Paul’s radar are those 2020 Olympics.

She’s one more year in school, but has already lined up a place at Birmingham Metropolitan University next year, to study Applied Science.

“On yeah, Tokyo,” she says, “that’s basically that’s the target, for the next three years, all major competitions leading up to the Olympics. I feel I am getting the experience now, to handle that stage, and hopefully I can just keep getting quicker over the next few years.

“And that will be with Ireland. I wouldn’t see myself ever changing country, after so long. I think that would feel like a bit of a betrayal if I decided that. I’ve always had great support, great encouragement, from Athletics Ireland.”

1 Gerry Thornley: Talk of Anglo-French hegemony is over the top
2 What next for green jersey hero Sam Bennett after the toughest of Tours?
3 The Offload: Saracens prove Pro14 is not fit for purpose
4 Shane Lowry brings the X-Factor to an Irish Open like no other
5 Two in custody in Tour de France doping investigation
Real news has value SUBSCRIBE

Doctor Duffy leads the betting for Wednesday’s Kerry National 06:00
Different Strokes: Bryson DeChambeau wants to go further 06:00
Shane Lowry brings the X-Factor to an Irish Open like no other 06:00
Netflix to capture Hamilton’s bid to equal Schumacher’s record 06:00
Ulster GAA warns crowds could be banned after Tyrone pitch invasion 06:00
Here is your handy guide to sport on television this week